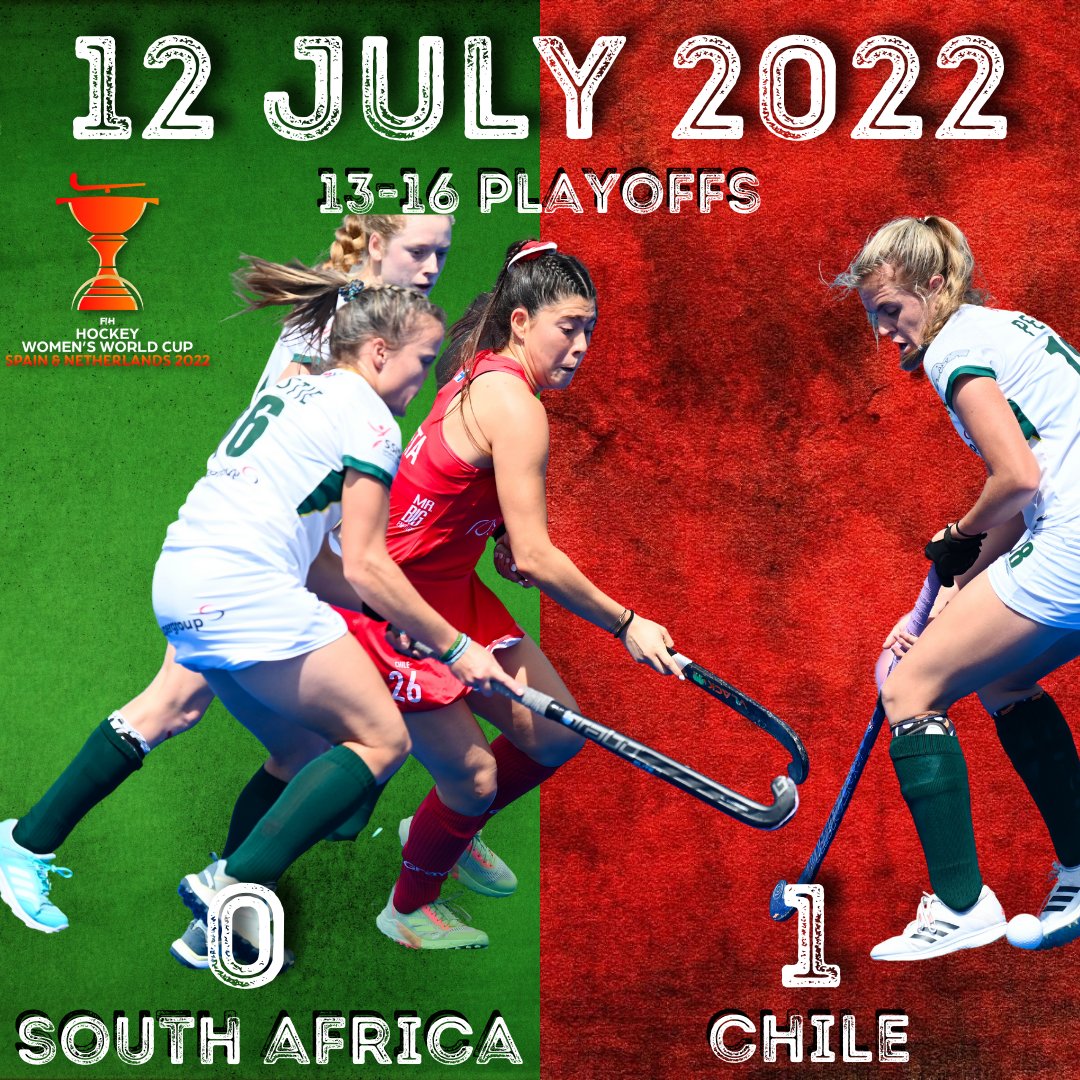 Chile confirmed a share of 13th spot at the FIH Hockey Womens World Cup in Amsterdam today when they triumphed by one goal over the South Africans, who settle for 15th place.

South Africa and Chile, the two lowest ranked sides in the FIH Hockey World Cup, met today in the 13-16 playoff bracket. Both sides knew that a victory would secure a finish higher than their respective World Ranking coming into the tournament, so there was more than just pride to play for as they concluded their participation in this year’s tournament.

Chile and South Africa had secured third spot in their pools, but both had fallen short in the 9-16 Playoffs and were looking to bounce back in Amsterdam today. For the South Africans they were also acutely aware of the opportunity to build some momentum ahead of the Commonwealth Games, looking for it to start today.

In between these two moments of danger for Chile, South Africa were attempting to create nuisance and it was Kayla de Waal who looked most likely with runs through the middle. The end pass was lacking from the South Africans though and a fairly inactive first quarter drew to its conclusion.

The Chileans thought they would score early in the second quarter, but an instinctive reactionary save by Mbande left the South Americans stunned. South Africa found Thati Zulu open in the circle, but the touch let the fan favourite down.

South Africa were awarded two penalty corners as they started finding more space in the middle of the park. But the game was lacking the quality final touch from either side and the goalless score line was probably the fair result.

The Chileans lost their referral early in the second half when they thought there was a foot. South Africa were starting to exert domination in terms of possession but were failing to create many meaningful opportunities in game that felt more and more like the first goal would be decisive. Lilian du Plessis had a snapshot, but it went wide and as the momentum was building the South Africans were with a yellow card for Erin Christie.

As so often happens the South African domination mattered for little as Chile scored. A great diagonal ball picked up Manuela Urroz open and her quick leading run gave her the space to finish superbly and leave the Chileans 1-0 up with just 15 minutes remaining.

Chile was reduced to 10 players for a five-minute period in the final quarter as they were penalised for playing the ball after the whistle. South Africa though were unable to create a single goal scoring during the suspension and Chile regained their quota with five minutes to go.

South Africa pulled their keeper and immediately created a circle entry and a shot at goal, but as had been the story of the game it was off target. A cross from Kristen Paton found the stick of Tarryn Lombard but the deflection was wide and it was ultimately Chile who were victorious and sealed a share of 13th spot with their second win of the tournament.

And that draws a conclusion on the South African challenge at the 2022 FIH Hockey Women’s World Cup. There were bright moments for the team who will look to build on this in the next couple of months as they face the challenges of the Commonwealth Games, the FIH Nations Cup and the Olympic Qualifying tournament.