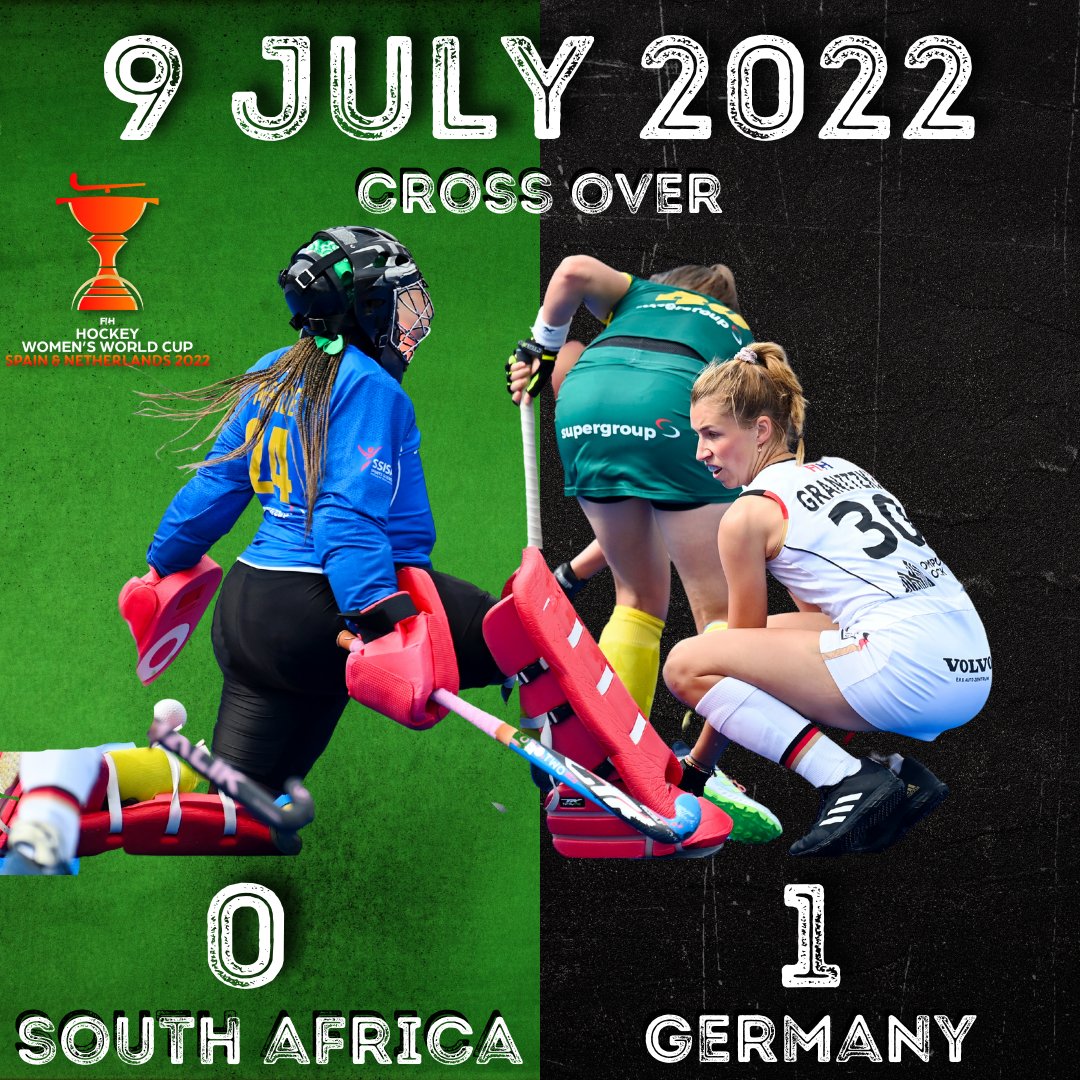 An inspired defensive display by the South Africans almost denied Germany the victory and a place in the top 8, but a good goal from Nike Lorenz was enough to secure the Europeans a place in the Quarter Finals.

South Africa lined up against a side they have not beat since 2004 when they took on Germany in the FIH Hockey Womens World Cup Cross Over. That result was a 3-0 win on the biggest stage at the Olympic Game in Athens and the team were hoping to summon the spirit of that performance today in the Netherlands. For the winner it would be a spot in the Quarter Finals, while the loser would play in less than 24 hours against Ireland in the 9-16 bracket.

South Africa were desperate to show an improved start to the game and they contested very well in the opening exchanges, being rewarded with the games first penalty corner. Unfortunately for Giles Bonnet’s team it was an opportunity that was well defended.

Germany grew into the game and were awarded a few penalty corners but the South African defence, marshalled by co-captain Phumelela Mbande were answering questions superbly no matter the language it was asked in. At the end of the first quarter it remained scoreless.

South Africa were playing on the counterattack and looking to trouble the Germans and they did exactly that early in the quarter. Kayla de Waal was picked up one-on-one with the keeper but Julia Sonntag made a massive decision and the right save. South Africa also had a penalty corner as their early momentum looked to reap dividends. But the execution let them down and the chance went astray.

Germany started to exert their pressure on the game as they gained the possession and territorial advantage. Germany probably would be disappointed that they didn’t take the lead as they had the best opportunities of the game especially Charlotte Stapenhorst who missed a golden opportunity. At the break the teams were level without a goal being scored with South Africa the happier of the two.

Early in the second half South Africa conceded their 7th penalty corner of the game, but once again Germany fired it completely wide and the frustrated figure of Valentin Altenburg grew in that aspect. Germany were asking for a foot in the circle shortly after for another penalty corner which took a rather long referral to be awarded. But in that time Phumelela Mbande had regathered the team and was the leader of another wonderful defensive effort.

Another penalty corner was mistrapped and the opportunity was lost for Germany, but immediately they won another one. On the 10th time of asking Germany finally converted through Nike Lorenz and gave the Germans what could be described as a deserving lead. Another Penalty corner shortly afterwards gave Germany the chance to double the lead, but they wasted the chance.

It was wave after wave of German attack as they looked for a goal to take the game out of the South African reach. But as the quarter came to an end the score remained 1-0 to the Germans with Mbande and her defense keeping South Africa in the game. 15 minutes remained for both sides to change the story.

Germany looked most likely with penalty corner 11 and 12 in the first minute of the quarter but once again they snatched at the opportunity. Germany were awarded a fortuitous penalty corner after that but again kept at bay. But in truth the South Africans were failing to get any meaningful and dangerous possession.

In the end the South Africans kept the Germans at bay and did not ship any further goals but didn’t create anything and saw their hopes of a top 8 spot disappear. Instead they will have to dust off and get back up tomorrow when they take on Ireland in the 9-16 bracket.