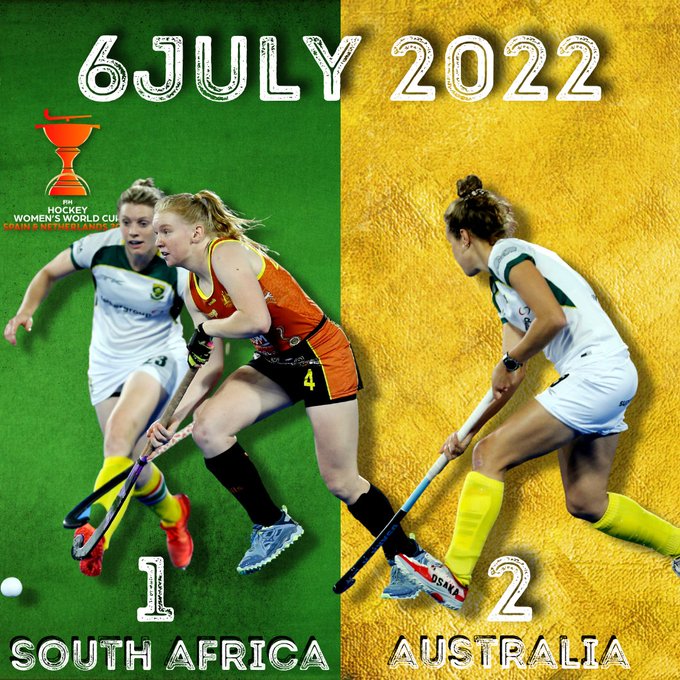 South Africa secured a spot in the knockout stages of the FIH Hockey Womens World Cup in Terrassa tonight as they went down by the solitary goal to Australia. The result means South Africa finish ahead of Japan in the group on goal difference to progress above the higher ranked Asian team.

South Africa and Australia will meet in less than a month from now in the Commonwealth Games, but their minds were fully on their first meeting since the 2014 tonight in Terrassa. For Australia they had already confirmed at least a spot in the Cross Overs but knew a draw would be enough to secure top spot and direct progress into the Quarterfinals.

For South Africa the equation was fairly clear following Belgium’s 3-0 triumph over Japan. A defeat by 2 goals or any better result would secure a spot in the Cross Overs and keep the top 8 possibilities alive.

South Africa created the first meaningful opportunity of the game winning a penalty corner. The Drag Flick from Jean-Leigh du Toit was solid but fairly routine to save and the Australians surged forward in a counterattack that looked certain to find the back of the net.

They would find the back of the net though shortly afterwards as a stick tackle resulted in a penalty corner and the powerful shot from Penny Squibb deflected off of Mbande into the back of the net. Australia was dominating the possession and the South Africans were having to keep the wits about them to not give away too many goal scoring opportunities.

South Africa were awarded another penalty corner after a shot from Kristen Paton struck the foot. With Jean-Leigh du Toit off the field, Lilian du Plessis took on the drag flick duty and finished superbly to re-establish parity. It was a sublime goal from the experienced campaigner. And it remained 1-1 at the end of the first quarter.

Australia won the first penalty corner of the second quarter but the shot by Summerville was wide to the relief of the South Africans. The African champions were inviting too much pressure from the Oceania juggernauts and were desperate to get some attacking ball.

Australia had a massive opportunity on the break and Malone had a golden chance to take the lead, but she snapped at the shot. The next phase of play though resulted in a penalty corner for the Hockeyroos. Phumelela Mbande made a wonderful diving save but Malone reacted to the loose ball and fired it home superbly.

At the half time break it was 2-1 a score that probably suited both teams.

A massive moment early in the second half as Lisa Deetlefs was adjudged to bring down the attacker and despite a review from the South Africans the penalty stroke was awarded. Mariah Williams stood up on her 100th cap and inexplicably fired the ball wide despite sending Mbande the wrong way.

The South Africans earned another penalty corner but on referral danger was identified and the call was overturned. South Africa did get an opportunity though as Australia received a green card but the shot by Du Plessis was narrowly wide.

The score remained 2-1 with one quarter left and South Africa holding onto the spot in the cross overs at this point of the game.

South Africa were keeping the Australians at arm’s length with half chances the only real chances in the opening exchanges of the final quarter. In fact the next big moment was scripted in favour of the South Africans as they were awarded a penalty corner. Quick thinking by Robyn Johnson caught the Australian defenders off guard and they played the ball despite not being five.

The resultant penalty corner saw the ball bobble across to Du Plessis whose shot had enough power but was straight at the keeper for a routine save. Johnson then laid a superb ball across the goal and Bernie Coston dived through but was unable to keep the ball down. 6 minutes remained for the South Africans to confirm a place in the Cross overs.

With some great game management the African champions were able to keep the Australians at bay and in the end secured a spot in the cross overs to play Germany!

The South Africans will now fly to Amsterdam where they will take on Germany in the Cross over matches on Saturday at 17:00.