South Africa stormed back from a three-goal deficit to steal a share of the points with Japan at the FIH Hockey Women’s World Cup in Terrassa, Spain. Having trailed 3-0 with 20 minutes remaining South Africa pulled back through Kristen Paton and a Tarryn Lombard brace to share the points and keep their crossover chances alive.

After opening game defeats South Africa and Japan met up in encounter that would realistically keep one sides hopes of qualifying for the cross over matches alive. South Africa triumphed in the last meeting between the two teams winning 2-1 in 2017 in South Africa at the FIH World League. The two teams have had differing fortunes since that and it was Japan who came into the team as the favourites sitting 10th in the World Rankings, while the African Champions sit in 16th.

Before the South Africans had enough time to digest the opening interchange, they were rubbing their eyes in disbelief as they found themselves two down. Mai Toriyama capitalised on the opportunity to give the Asians a two goal lead, which you would be hard to argue against. 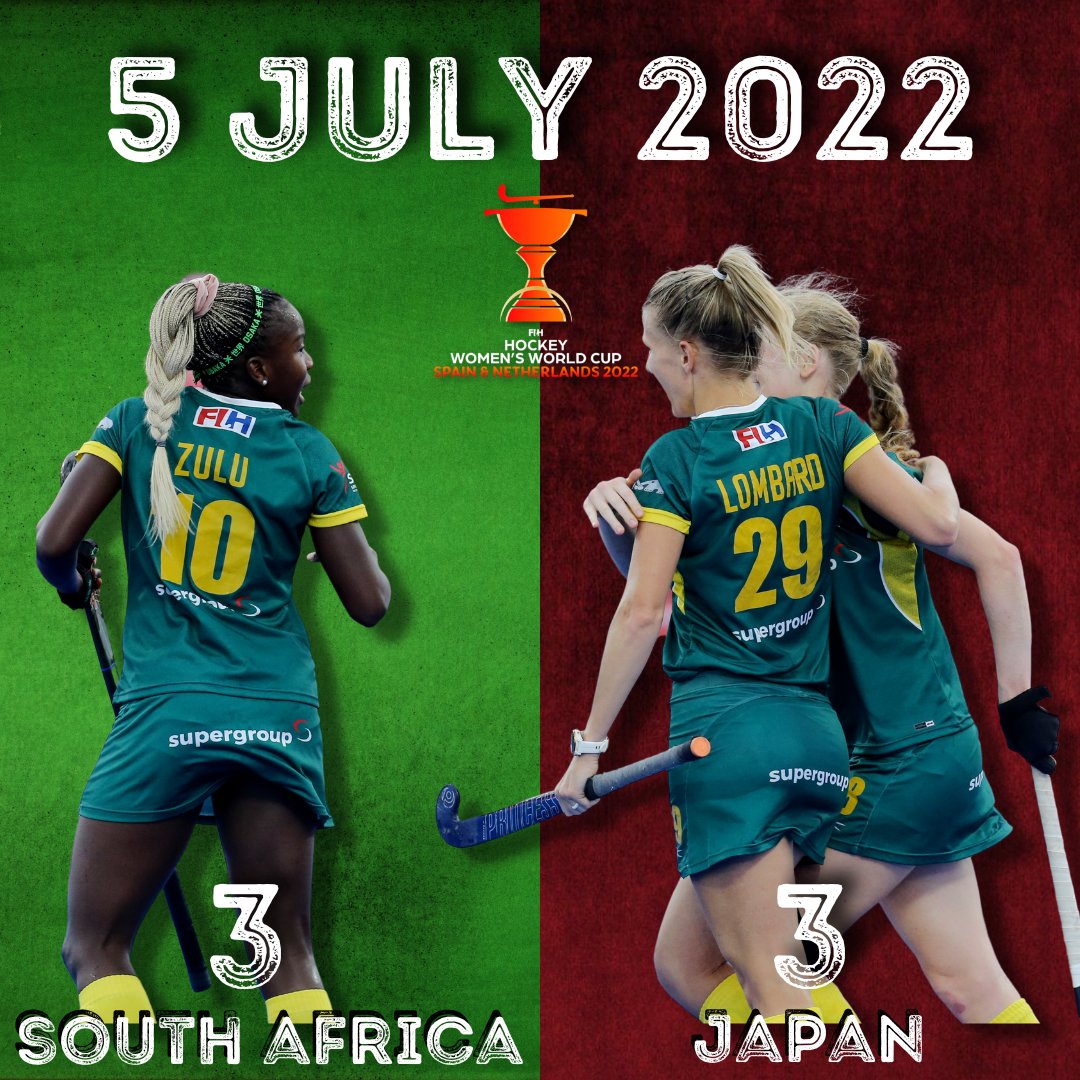 South Africa fought back superbly in the second half and were troubling the Asians with far more regularity as they thought they had won a penalty corner through Quanita Bobbs, but the referral system saw it overturned. Despite the South Africans starting to build and creating a few entries they were sucker punched by a third for Japan. The Asians won a penalty corner and despite a great save from Mbande, the rebound was put away.

Rather than denting the sails it spurred the South Africans on. Onthatile Zulu was looking dangerous as she ran at the opposition while the likes of Kayla de Waal, Kristen Paton and Bernadette Coston were growing in influence along with the effervescent Quanita Bobbs. It was Paton who brough the South Africans their glimmer of hope as she reacted instinctively after de Waal’s shot was saved and became the 26th FIH Hockey World Cup goal scorer in South African history.

The end of the third quarter came at the wrong moment for the South Africans comfortably in the ascendancy and they continued with that momentum at the start of the fourth quarter with De Waal, Paton and Coston all forcing saves from Japan. South Africa’s endeavours were awarded with a penalty corner after another good run from Zulu down the side. Agonizingly the shot was inches wide of the post from Jean-Leigh du Toit, goal scorer in the opening game.

Another penalty corner was awarded after Zulu made another great run and this South Africa punished the Japanese as the Jean-Leigh du Toit slap was superbly guided in by Tarryn Lombard to reduce the deficit to just the single goal.

With just two minutes remaining South Africa pulled Mbande off and almost immediately Kristen Paton created something out of nothing and fired just wide. The pressure continued as Thati Zulu won a penalty corner. The first one was deflected off a foot, but the re-award was converted by the South Africans as Tarryn Lombard finished again to send South African fans into crazy celebrations at home.

South Africa broke with a two on one right at the end but were unable to capitalise and at the end they had to settle for a share of the points. Despite a slow start the South Africans discovered their fighting spirit and brought the game to the Japanese and will ultimately end the game as the happier of the two teams.

A moment that defines the entire game.@SA_Hockey came from three goals down and scored a last-minute equaliser to secure a point against Japan 👏