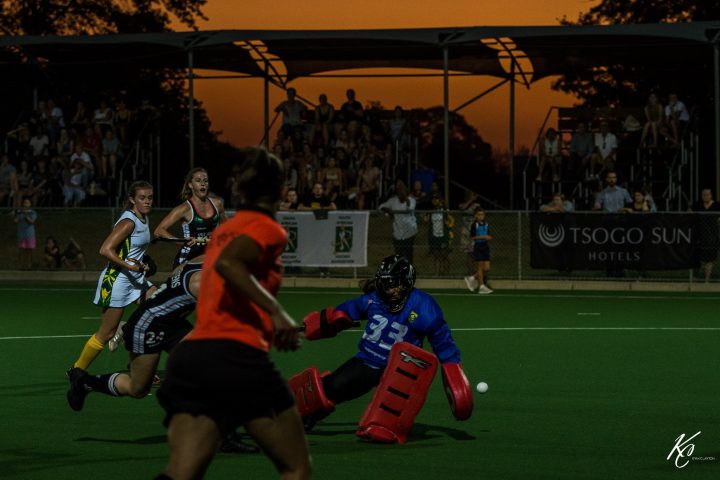 The second test of the 2020 Summer Series between South Africa and Germany will be one that the Germans will fondly remember, and the hosts will look at for lessons on efficient and precise attacking.

It took the visitors less than a minute to take a lead through Pia Maertens with her third of the series and they doubled the lead in the 9th minute through a Pauline Heinz field goal. The South Africans ended the quarter with the perfect response though hard-working midfielder Kristen Paton. Having had to defend for the previous five minutes, Paton played a precision one-two with Robin Johnson produced a wonderful run and finish into the bottom corner. It was a bright moment for the African champions, but unfortunately the last true bright moment of the game as the German juggernaut punished the hosts in the remainder of the game.

Although the second quarter was still competitive, the Germans only managing the one goal in the session through Naomi Heyns, who tapped in from less than a metre after the hosts failed to deal with the cross to re-establish the two-goal cushion.

The decent crowd in attendance were then witness to German efficiency picking up goals at regular intervals in the second half. Rebecca Grote made it 4-1 through a “wrong side” penalty corner attack and it was quickly 5 for Germany when Sonja Zimmerman with a low drag flick. The Germans were accumulating the penalty corners through a sheer weight of pressure and Lena Micheel was the next to benefit with a rocket strike from the top of the D to make it 6.

It was a penalty corner again for the 7th with Sonja Zimmerman sending in a low drag that probably should have been stopped and the Germans made it 8 with their final goal of the game. Rebecca Grote probably didn’t catch the strike as well as she would like but the variation available to Germany made them a constant threat.

South Africa will be massively disappointed with their performance in the game, but this was more about just how good the Germans are. They are undoubtedly a medal contender at the Tokyo Olympics and have maybe laid down the mark for what South Africa need to do in our own road to Tokyo.