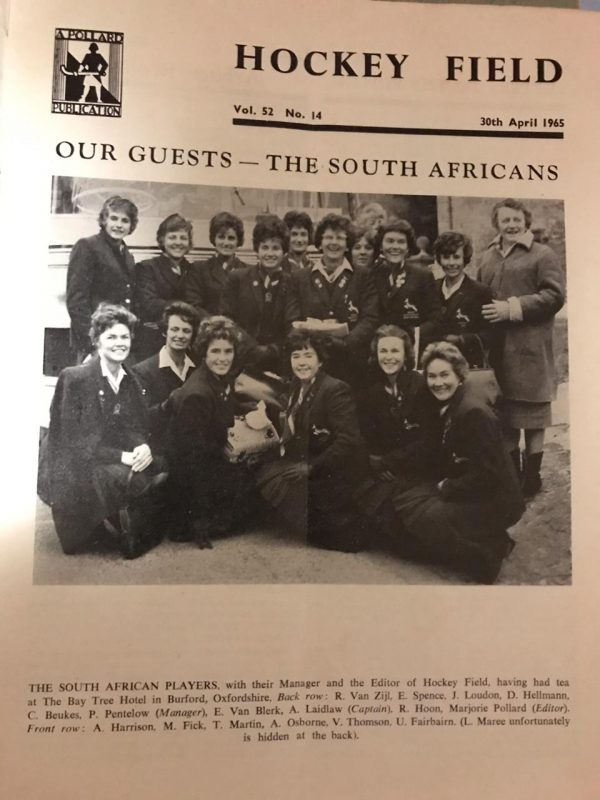 Audrey, widow of Stan and beloved mother of Mark, Kerry and Craig, passed away in hospital on 8 June 2019. She never recovered fully from a hip replacement procedure in June of 2018 and although she remained fiercely determined, she unfortunately lost much of her independence in the last year of her life.

She was born in Pietermaritzburg and attended Pietermaritzburg Girls’ High School. As a schoolgirl she displayed an amazing natural hockey talent. After matriculating, Audrey soon represented Pietermaritzburg and the Natal Women’s teams as she was regarded as an outstanding young player. She captained these teams from 1957 until she retired. In her early twenties she was an automatic selection to the National Team, and represented South Africa in 1953, 1954, 1956, 1959, and 1963. (She was unavailable for selection in 1961.) In 1959 and 1963 Audrey’s leadership skills were recognised and she was named as Captain of the South African Women’s Hockey Team. She announced her retirement at the end of the 1963 season, at the pinnacle of her success.  She had just led South Africa to a famous 3-1 victory over England, in front of 65,000 spectators at the Wembley Soccer Stadium, in London; this was indeed the highlight of her career.

Not only was Audrey an excellent hockey player, who incidentally never stopped working at her skills, but she was respected as a great human being and was popular both on and off the field. She was admired, for her outstanding achievements and excellent qualities, by all who knew her.

Audrey was a tireless administrator, during her playing years and after her retirement as a player. She was a Provincial and National Selector from 1965 until 1975. In 1970 she held the position of Manager of the South African Women’s Team.

Her sense of fun and her humour, at all times, were unrivalled. She was a beautiful and loving friend. We were privileged to have her in our lives, and as her friends and members of the hockey fraternity, we join together to mourn the loss of a great friend. Rest in peace, Auds.