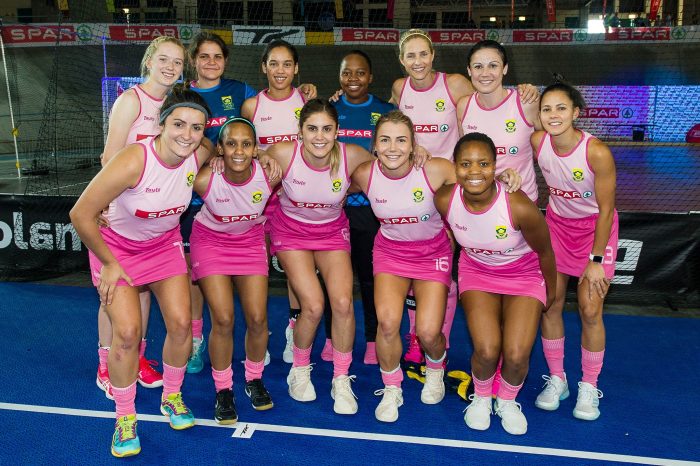 The third test between Poland and SPAR South Africa took place in Rogowa last night. Poland led the five-match series 1-0 after two games and were up against a fired up South African side dressed in Pink for the occasion.

In a combined initiative between SPAR and the South African Women’s Indoor Hockey team, the team will wear pink on certain fixtures in standing up for No Violence against Women and Children. This was started in the home series against Ireland in a match South Africa won 6-2. SPAR have also pledged that each time the team wears the pink kit in a series they will sponsor an amount of R4000 as well as R100 per goal scored to the charity supported by the SA Women’s Indoor Hockey team. For last nights game the team chose the Open-Door Crisis Care Centre

The Open-Door Crisis Care Centre (The Open Door) is a non-profit organization established by Thora Mansfield in 1997 at the request of the local South African Police, to assist women and children who were victims of rape and domestic violence.  Today they are regarded as a lead organisation in the country, lobbying for better service provision for victims of all forms of crime both in our homes, communities and in the workplace.  From small beginnings their “one stop crisis care centre” has reached over 400 000 men, women and children through direct and indirect services.

The third quarter saw a lot of action but mostly from the umpires as four green cards and one yellow were shared between the two sides, but no goals were scored setting up a frenetic final quarter. The SPAR South Africa ladies must have thought they had done enough to win it when Kara Botes scored with three minutes remaining, but Poland showed their pedigree with Reder equalising from an error before with less than 15 seconds on the clock Magdalena Zagajska stole the victory for the Europeans.

Although the result will be disappointing the South Africans have clearly shown that the gap between the European Elite of the Indoor Hockey game and themselves is as small as it has ever been.