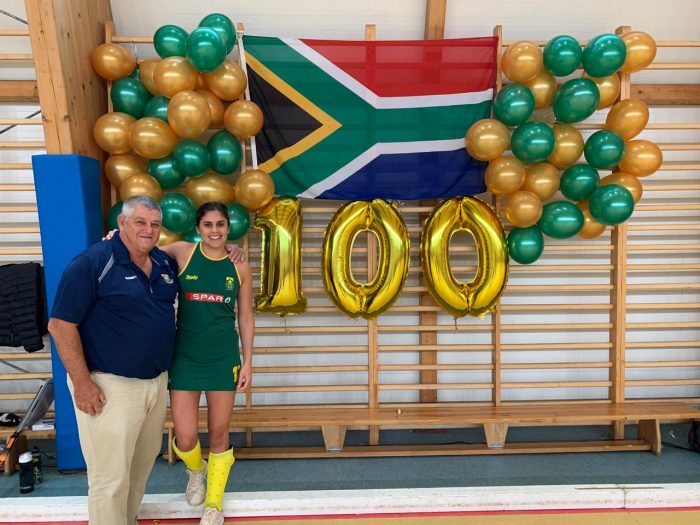 The SPAR South African side took on the Polish Indoor Hockey team for the second test in Rogowo this morning. The game marked the 100th cap for Jessica O’Connor joining her skipper in the centurion club. Incredibly O’Connor has played every single test match since her debut against Namibia on 11 April 2014, a superb statement to her fitness. Remarkably the match also marked coach Lennie Botha’s 100th in charge of the SPAR South Africa women’s side. A superb achievement for both Botha and O’Connor.

For much of those 100 test matches, Botha’s SPAR South Africa could be categorized as built around a solid defence. Conceding only 185 goals across 100 test matches. One of the centre pieces to that defensive stability is the superb defensive work of Jess O’Connor. Their 100th test match would be highlighting the same.

A tactical arm wrestle finally gave its first inches in the 11th minute when Robyn Johnson converted a wonderful team effort that went through almost every player on the field. The South Africans have shown countless times in the past 24 months that the most dangerous time on a field is just after a goal as they regularly give the opponents the double punch. But today while the echoes of their celebration were still reverberating in the venue Poland pulled one back once again through the impressive Paulina Reeder.

Although the South Africans were denied a penalty stroke somewhat contentiously, the game ended in a 1—1 draw with the visitors incredibly impressive. Just 24 hours after they had been defeated 2-0 South Africa were unlucky to only draw. Something that sits well with the team.

Captain Cindy Hack paid tribute to Botha and O’Connor: “It’s a wonderful achievement for both Jessica and Lennie and we are delighted that we could give them the performance that their milestone deserved. We came here with the goal of competing with one of the best indoor hockey nations in the world and we are doing that exactly!”