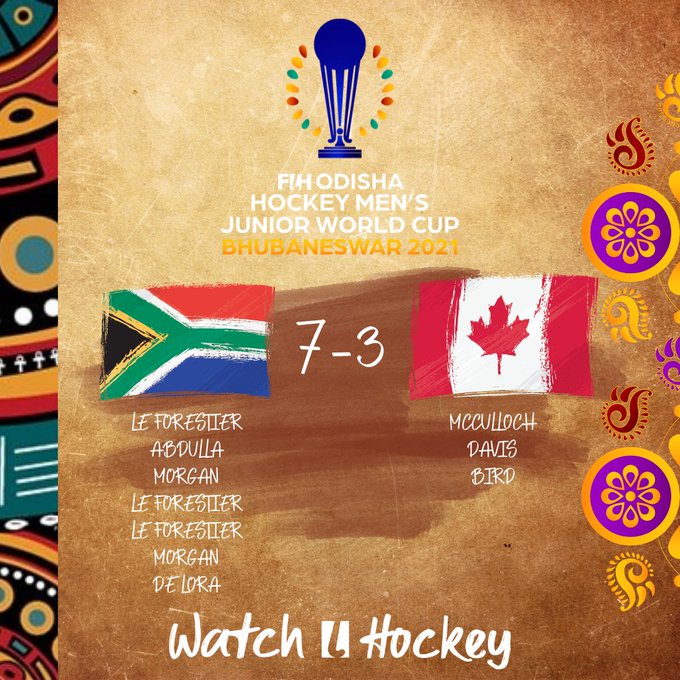 South Africa and Canada began their classification matches and a quest for a top 10 finish as they faced off in Bhubaneswar to start the next phase of the FIH Junior World Cup. It was the second meeting between the two sides after South Africa beat Canada 3-1 in the 2016 iteration of the tournament.

A tentative game and a goal-less first quarter quickly came to life as South Africa produced their best quarter of hockey combined with some inexperience from Canada in the second quarter. Cameron le Forestier and Idrees Abdulla both got themselves on the score sheet before Guy Morgan’s penalty corner struck a foot on the line and the captain converted his own penalty stroke. 3-0 the half-time score, but South Africa were probably wondering how they hadn’t scored more in that dominant second quarter.

Le Forestier though quickly made sure he would not rue chances as he netted his hat-trick and his fifth of the tournament. First, he squeezed a shot past Coombs before a diving deflection made it three for the impressive youngster.

A frenetic final quarter presented itself next as five goals were shared between the two sides, while the South African’s gave themselves some questions to answer. Guy Morgan made it 6-0 with a superb penalty corner before Flynn McCulloch scored what looked like a consolation goal. Trevor de Lora re-established the 6-goal lead when he effected a turnover in the Canadian defence and romped home a tomahawk finish.

Canada finished the game the better side though with Sean Davis and Alexander Bird both netted while Bird thought he had one more goal late on, but a touch went unspotted. The game ultimately ended 7-3 to the Africans who march on to the 9-12 bracket and a meeting against either Pakistan or USA.

Man of the Match Cameron le Forestier shared his thoughts after the game:

“We are still trying to chase those 60 minutes of good hockey, we produced maybe 30 solid minutes, but we know we need to be better. Our objective is to try and finish 9th and that’s what we are working towards. I’m pleased with my performance and goals, just about being in the right place at the right time!”

Cameron Le Forestier awarded the Player Of The Match for his hat-trick.

South Africa will now play for a spot from 9th to 12th while Canada will play for a 13th to 16th place finish.