South Africa and Namibia locked horns for one final time tonight in Stellenbosch as the SA Teams looked to complete a clean sweep as the teams competed for the Allistar Fredericks African Challenge Trophy.

The girls started the evening off with the two teams having a good go at each other in the early exchanges. Namibia was looking dangerous creating opportunities by winning a couple of penalty corners, but throughout the series the profligacy had been costly.

South Africa established the lead with a wonderful counter attacking play that saw series top scorer Jan van Antwerpen to run off the back post and finish superbly from a great but of work. Both teams had a few opportunities but neither could add to the scoring at the half time break.

South Africa would double their lead in the second half when a penalty corner was awarded and the sheer weight of power in the shot from Anja Tromp mean Andrea Rakow could not keep it out. The South Africans were looking to put a convincing score line on the board having failed to dismiss the Namibians in the first two tests, and coach Andi Bernstein will be pleased with what she saw.

Captain Kirsty Leonard made it three at a time when South Africa were down to 10 players having received a green card. Tromp won the team a penalty corner and Leonard smashed home a straight hard low strike, reminiscent of the great Pietie Coetzee-Turner, giving the Namibian defence no chance.

South Africa had enough time to score one last goal. A penalty corner from the South Africans wasn’t cleared and it bobbled across to Taheera Agousti who finished with a dismissive strike that would look good in the world of cricket too. Full time South Africa 4-0 and a series win 3-0.

Player of the match on the night was awarded to Jana van Antwerpen. 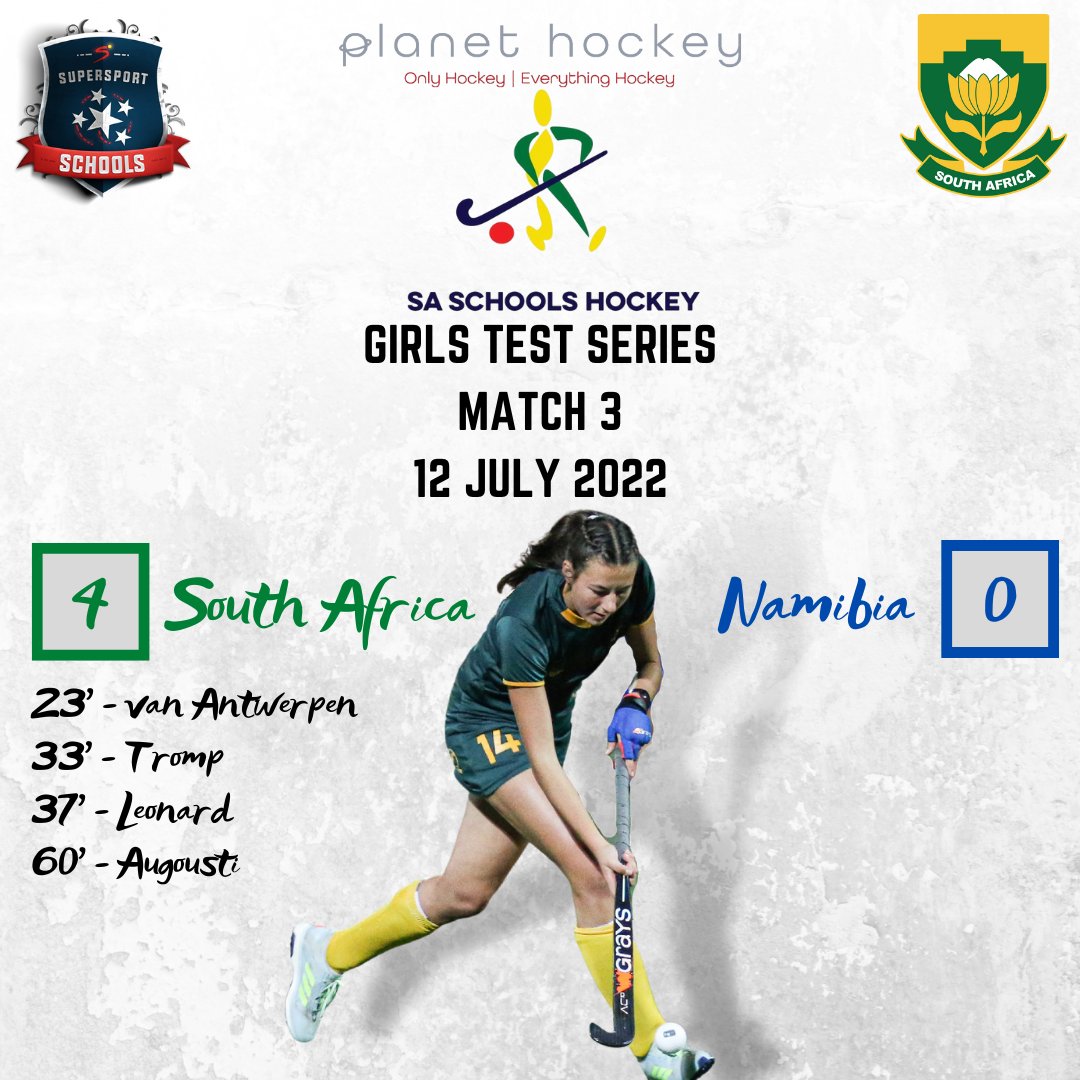 The two boys side met in the final game of the series following the conclusion of the girl’s game. The Namibians were looking to start better having conceded three goals in the first quarter of the opening two games, and they lived up to that with a far more solid starting. They charged down the first SA penalty corner effectively and caused a little bit of trouble themselves.

But South Africa found the goal that gave the m the lead. A wonderful diagonal overhead by James Flint setup the attack. The cross that came in was simply finished by Jamie Seale and the hosts held the advantage before the end of the first quarter.

It was double before the end of the quarter with a sublime penalty corner from Ross Montgomery that hit the top corner of the net giving Namibia no chance and the hosts a 2-0 lead at the break.

South Africa made it 3-0 superbly. A wonderful pick up and pass from Kossman saw Akha Mda score a goal that was made on his positioning, something many coaches will use as a video in future.

Another one for the videos is the penalty corners and tonight it was Ross Montgomery dishing out the lessons making it 4-0 with a blinding strike. Before the half time break it was 5-0. A quick break from the South Africans and a reverse shot from Mentoor from the top of the circle added cherry to a very tasty first half cake.

South Africa were knocking on the door more frequently than Eskom Load shed in the third quarter but were frustrated by their inability to convert. But Brett Horn did manage to get one when he was afforded space to make it 6-0.

7th heaven arrived when James Flint came to the party and found his target from the penalty corner with a rocket that sent him off his feet, but almost split the back of the net too.

South Africa continued looking to add to the score line but weren’t successful and at the end of the day it remained 7-0 to the South Africans on the night and 3-0 in the series.

Bagcine Gqweta was adjudged as the player of the match. 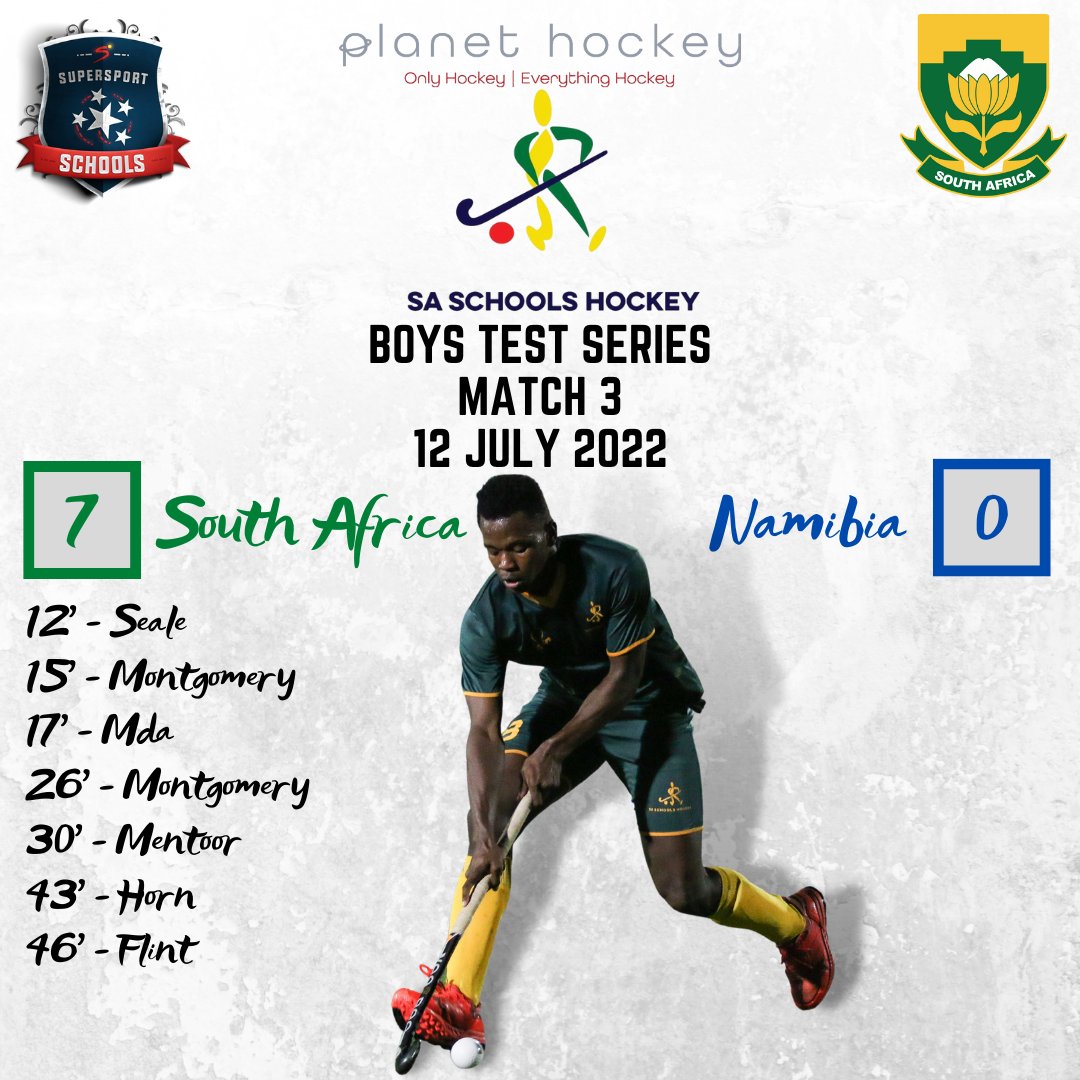