The South African and Namibian U18 sides returned to Stellenbosch this evening in order to take each other on in the second of a three match junior test series, contesting for the Allistar Fredericks trophy. The South African sides had won the opening test on Sunday on looked to seal the series at a chilly Maties Hockey Stadium.

South Africa’s boys side wanted to get more goal mouth activity and goal scoring opportunities from open play compared to the opening day. They got exactly that through Ross Montgomery when his attempted cross was deflected in, and they hosts had the lead. Namibia though was not here just to make up the number and instead produced a sublime moment of quality through captain JP Britz. A solo run of great strength was capped off with a scintillating strike into the top corner on the reverse side.

South Africa were lethal at the penalty corner time on day 1 and continued that with James Flint adding his fourth goal of the series and restored the South African lead. It was a flick with a wonderful disguise that would make a number of universities probably take note. That one goal advantage was double when Shaun Hensilwood played a good advantage and James Seale finished with a brilliant upright reverse stick, reacting earlier than anyone else.

Early in the second quarter there was a goal of great quality. Carlon Mentoor fired in an early low and hard cross and Captain Alex Blows dived in to score the fourth for the hosts. It was five for South Africa shortly afterwards as the number 5 James Flint took a penalty stroke and smashed it past Zander Smit in goals for the Namibians. It was six of the best before half time. Montgomery latched onto a loose ball in the circle and slid it into the bottom left corner to compound the agony for the Namibians.

A goal line clearance from Namibia offered a momentary break for the Namibians, but the resultant penalty corner saw James Flint net his hat-trick, his second of the tournament. A wonderful penalty corner variation saw the German spin and Flint had acres of space; he only needs centimetres.

At the half-time break it was 7-1 to the South Africans as a painful first half drew to a conclusion for the Namibians. The break brought a renewed focus from Namibia as they tightened the ship a bit more. The goal eventually came when Maart and Den Bakker combined for Maart to pick up the loose ball and fire it home superbly.

It took almost the entire final quarter before Alex Blows powered home a powerful flick that was not amiss on an indoor hockey court and there was still time to complete the 10 out of 10 performances. Moses Kossman had number 10 on his back and had the simplest finish to make it 10 for the hosts and confirm victory in the test series with a game to spare.

The man of the match on the day was Daniel Den Bakker and he was awarded R1000 from Planet Hockey for his award. 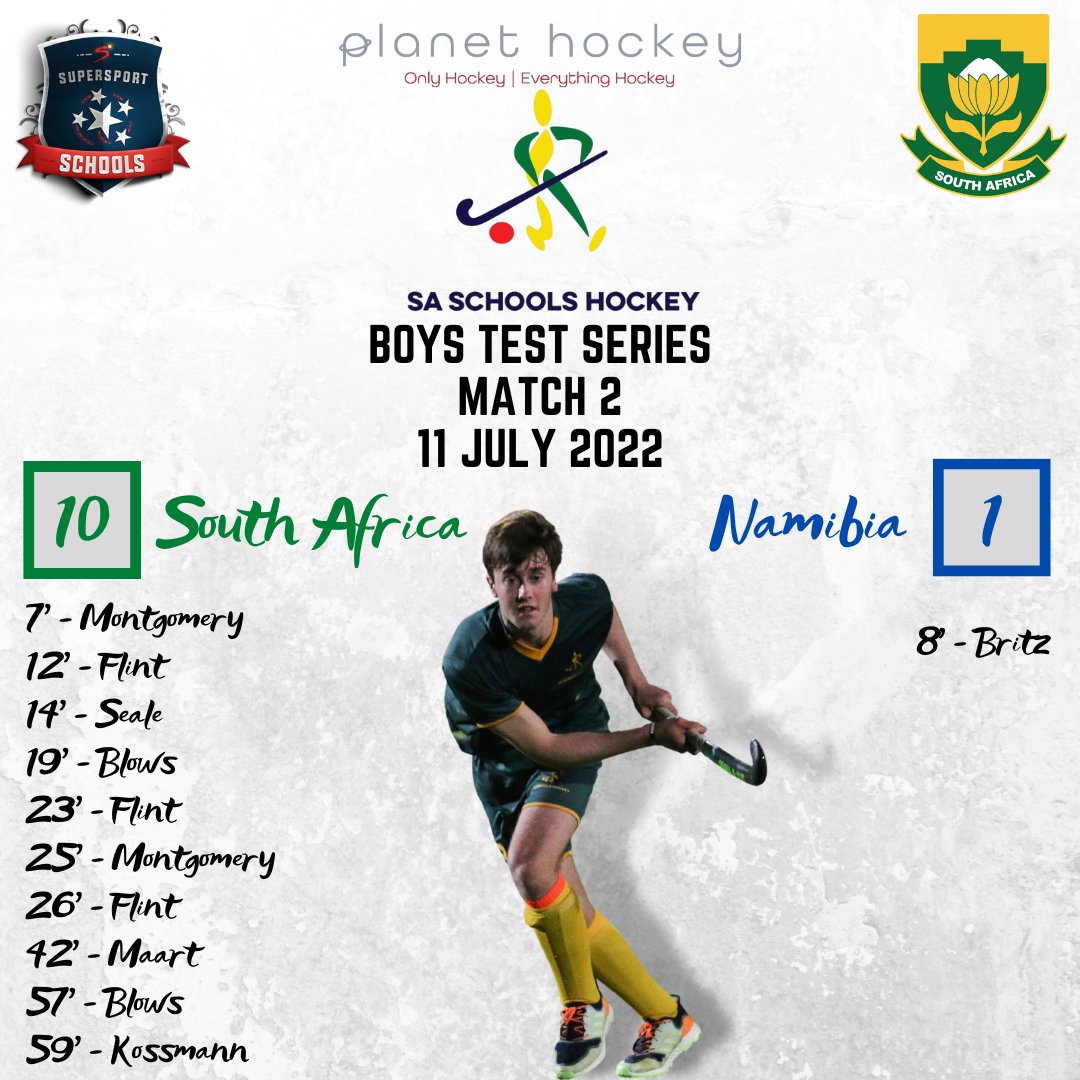 The SA and Namibian women offered a tantalising prospect of activity in the second match of the night. And once again it was the Namibians who opened the scoring. They won a penalty corner and Caitlin Gillies, who scored fore the senior Indoor side at the African Hockey indoor Cup of Nations last year opened the scoring with a powerful strike.

As we saw in the opening game though, the South Africans were looking to get back into the game immediately with Malikah Hamza showing tremendous skill and unsettling the defence. Her endeavours won the team a penalty corner and it was only apt that she would pick it up on the rebound and finish it superbly to restore the parity.

The parity would not be there for long as the South Africans turned one into two with the superstar from Day 1 Ntsopa Mokoena found a pocket of space and fired home to the delight of very cold crowd as the half time break brought a one goal lead for South Africa.

Namibia found themselves level in the second half early on when Anthea Coetzee hit a shot straight at Leane McLaren, but in the pouring rain the shot bobbled and crawled its way into the back of the net. The weather was not playing its part, but the teams were playing a riveting battle that was all square into the final quarter. At least that’s what everyone other than Jana van Antwerpen thought as she reacted to the brilliance from Tromp and with the last hit of the quarter she finished into the empty goal.

Namibia though came out swinging winning a couple of early penalty corners as the rain started to pour even harder. They managed to find the ball in the back of the net, but the whistle had already gone for a re-award much to the disappointment of the visitors. It was an opportunity that would be wasted as the South Africans were given the opportunity to wake up from the mini slumber they had found.

It was a final quarter that seemed largely influenced by the elements as both teams turned the ball over far too easily. The South Africans were able to hold on for the victory and with it they sealed the series ahead of the final game.

The player of the match was awarded to Azaylee Philander from Namibia.

Tomorrow both series conclude with the third and final test. 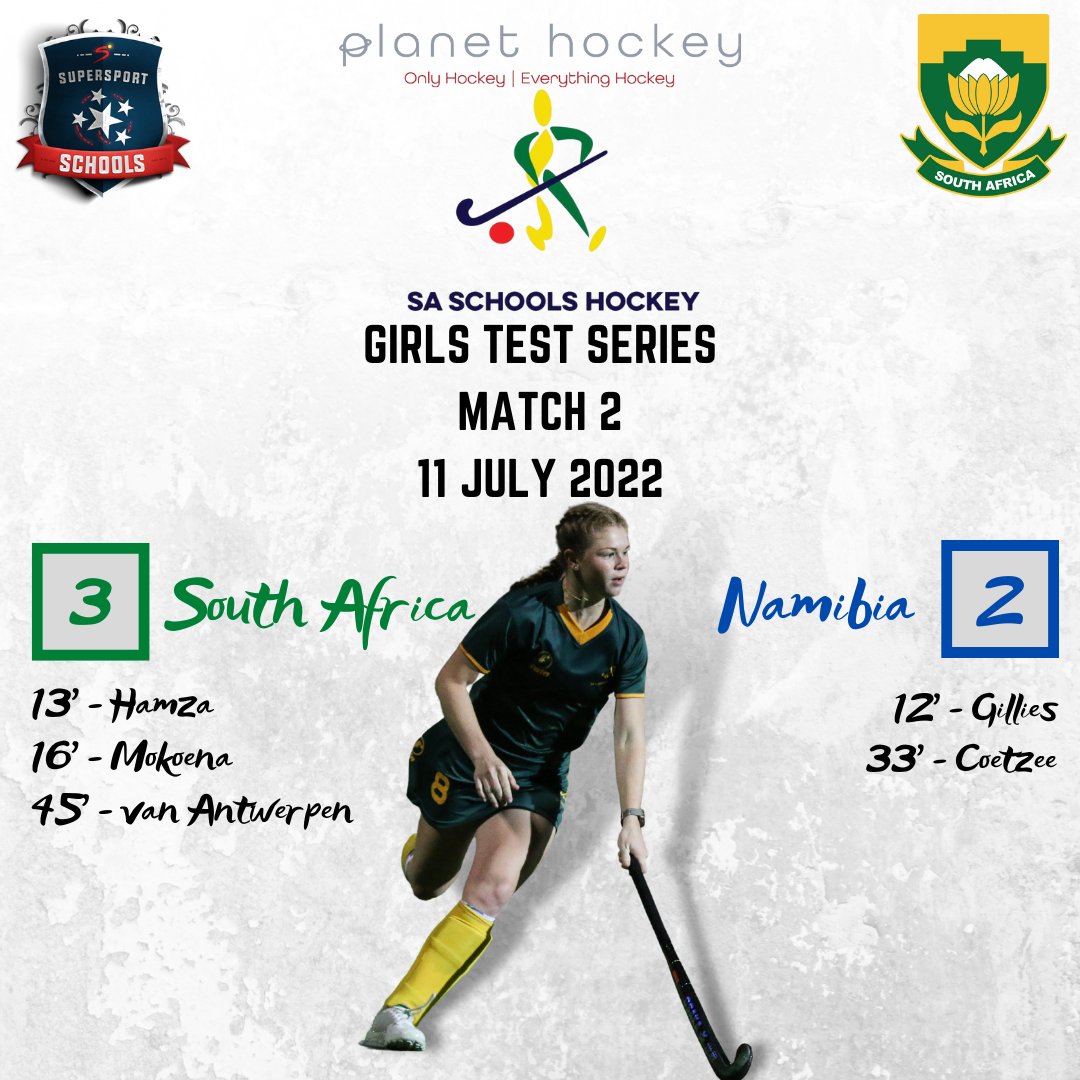