For the first time in three years the SA U18 teams got to play in an international test series. The U18 Boys and girls who were selected at the end of the recently completed IPT had the opportunity to don their national colours for the first time in a three-game series against Southern African neighbours Namibia. The series would be contested to win the Allistair Fredericks Trophy, named in honour of the late South African hockey icon.

The girls opened the program in game one and it was immediately apparent the Ntshopa Mokoena was going to be a central character to the series as she was a pivotal figure in all the moments of significance in the opening exchanges. In truth she was the undoubted highlight of the opening quarter as the dominant South Africans were unable to open the scoring.

Anja Tromp produced a wonderful reverse stick shot that looked destined for the roof of the net, but Jaime Henckert was dialled in. Just seconds later it was 1-0 to the Namibians as a turnover was affected and Kyla Landsberg scored a goal against the run of play. South Africa were desperate to get back into the game and there was no surprise that the goal came for Mokoena who turned well in the circle and fired into the bottom right corner. 1-1 at the break, Namibia undoubtedly the happier of the two sides.

In the opening minute of the second half Jana van Antwerpen was found isolated with the keeper, and she was taken out. The penalty stroke was rightly awarded but van Antwerpen fired it wide. She wouldn’t be reflecting on it for long as Tromp ran up the side crossed it and van Antwerpen finished to give South Africa their first lead of the day. That lead should have been doubled seconds later but the ball parted the attack like the red sea.

South Africa were still creating the most dangerous opportunities, but Namibia reminded them of the danger on the counter when they won a penalty corner. They were unable to convert, and the third quarter ended with the South Africans holding a slender lead.

South Africa would double the lead when Jana van Antwerpen doubled her individual tally, and the South Africans earned a two-goal cushion which they would ultimately hold until the end of the game and secure the opening test match 3-1.

There were no surprises as Ntshopa Mokoena was nominated as the player of the match! 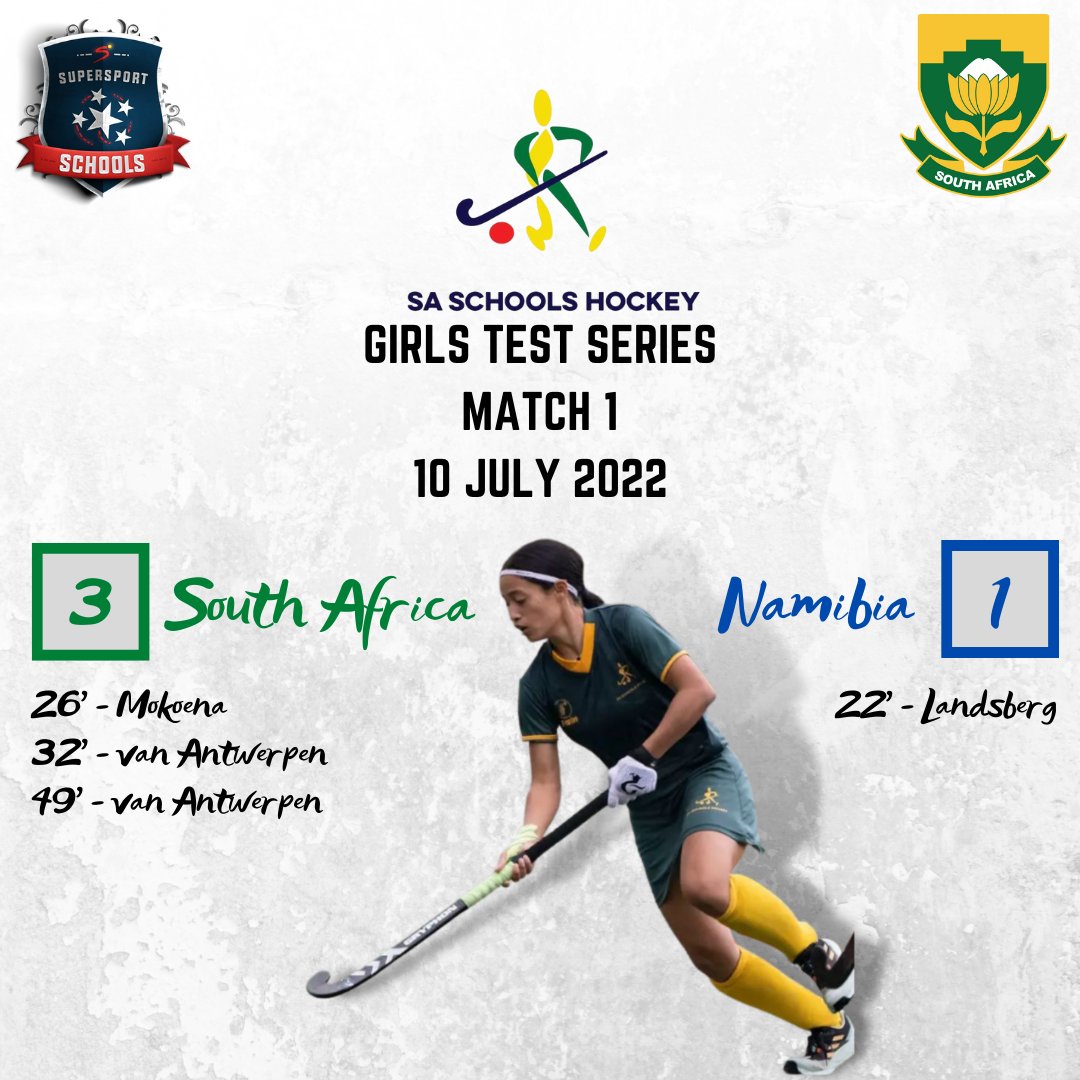 The SA U18 Boys were next up as they also took on their Southern African counterparts and watched on by head coach Devon van der Merwe were donned in all green with gold socks taking on the Blue and red of Namibia.

It took South Africa exactly 90 seconds to earn the games first penalty corner through a great run by Horne. From the resultant penalty corner, the lanky form of Ross Montgomery made no mistake with a great disguised drag flick to give the hosts the lead. Namibia did have an opportunity to pull one back, but JP Britz flick was fairly easily saved. As the quarter drew to a conclusion the SA boys were awarded a second PC and James Flint stepped up and smashed it home. Within another minute it was a copy and paste, or maybe a retweet is the right terminology, as Flint repeated his feat and made it 3-0.

Early in the second quarter Namibia were denied first on the line before the ball struck the post and then shot wide. James Flint was the man on the post who denied the shot. Namibia was growing in the game and had another opportunity to force the breakthrough with a one-on-one that was saved superbly.

South Africa looked dangerous every time they went forward but lacked the first quarter intensity in the second quarter and Namibia felt they were in with an opportunity. James Flint though had his own ideas and completed a first half hat-trick on the hooter to make it 4-0!

South Africa played a more technical astute game in the second half controlling possession a lot better and dictating the pace of play. As much as that would have impressed the coaching staff, they will be disappointed at the number of times when decision making was less than optimal. However, there was another penalty corner won by some wonderful 3D skills by Jamie Seale, but for the first time he failed to get hold of the flick well enough. The third chukka ended with no work for the score keepers as it remained 4-0.

In the final quarter it was Jamie Seale who was doing the most to add to the score but he was met by resolute defence or indecisive finishing as the game lost a bit of momentum. South Africa were awarded five consecutive penalty corners with just under five minutes remaining, but despite the waves of pressure they were unable to convert and complete the 5 star performance.

James Flint was awarded the player of the match on the back of his first half hat-trick. 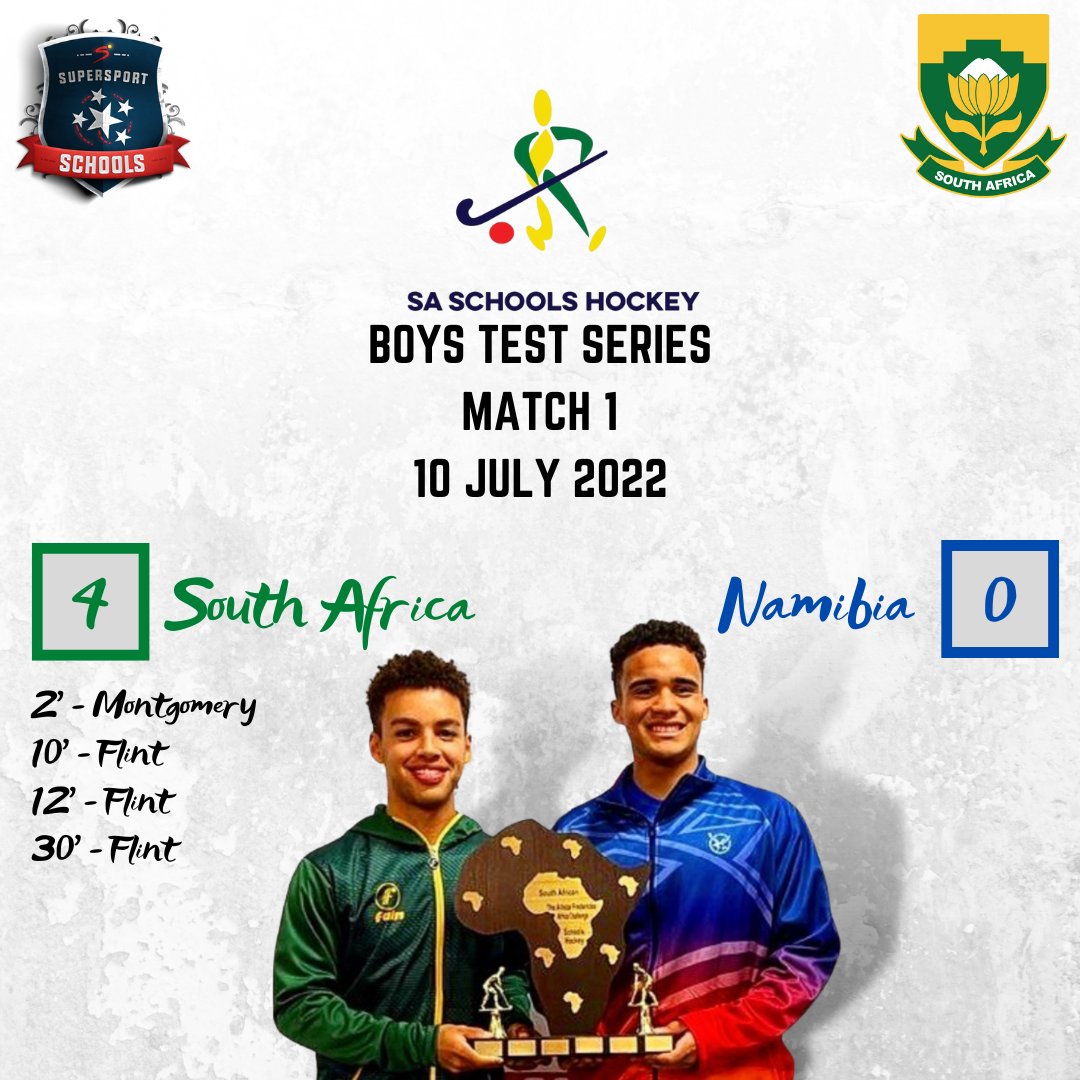 Tomorrow sees the games played in reverse order as the Boys will play first at 18:45 and the girls at 20:45 in the second test. The matches will be live on the Supersport Schools app, as well as on Supersport Variety 4 (Channel 209)