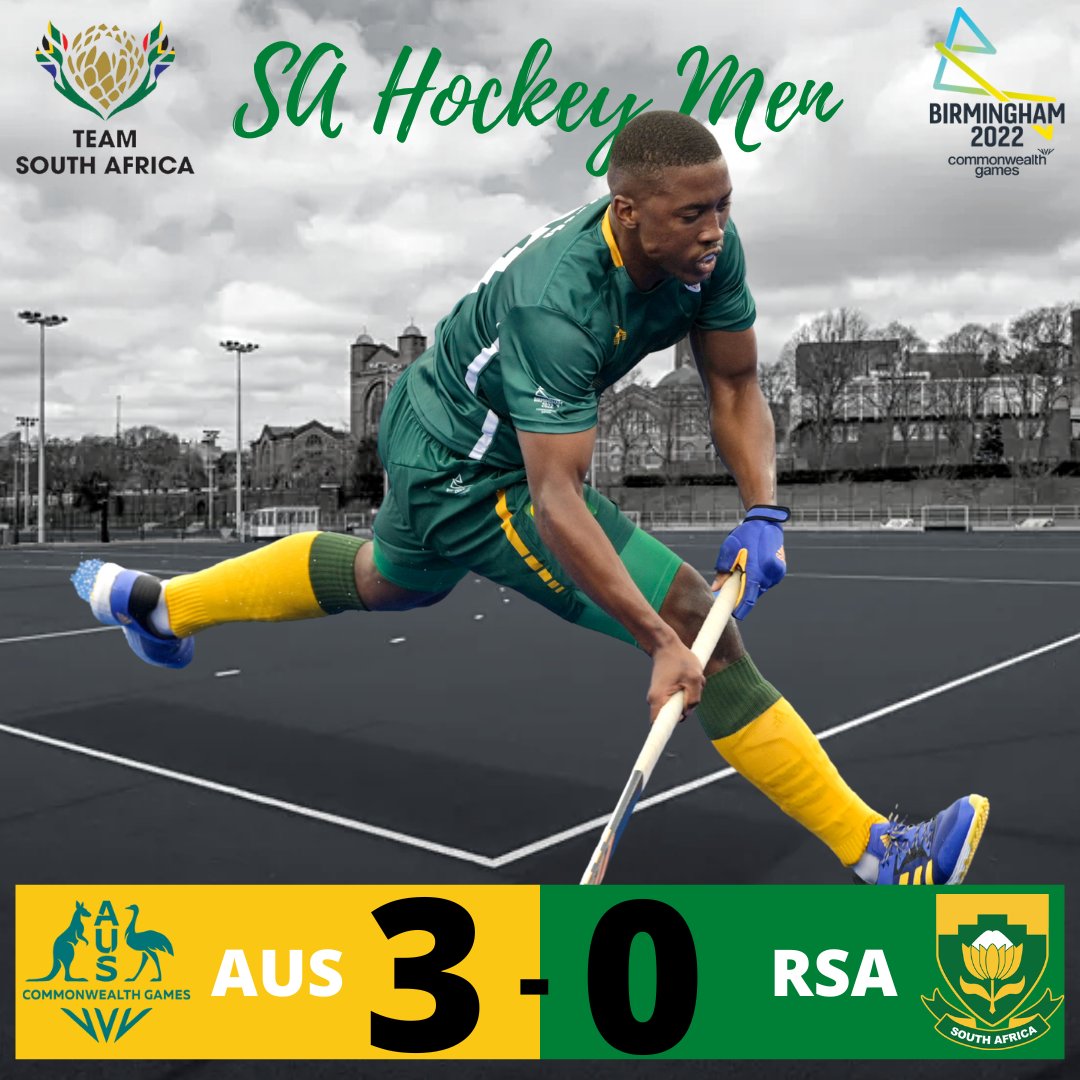 Australia started frenetically with two early goals against the South Africans but were made to work incredibly hard for the remainder of the game to seal a victory and confirm their spot in the Semi-Finals of the Commonwealth Games.

The South African Hockey Men took on the world number 1 ranked Australia in Birmingham today as they looked to position themselves positively ahead of the battle with New Zealand tomorrow for a place in the semi-finals and the medal rounds. Realistically the South Africans were looking to trouble and contain the Australians in what would be a remarkably tough encounter. Captain Tim Drummond was missing for the game due to illness.

The South Africans found an Australian foot in the opening minute and should have been awarded a penalty corner, but somehow the video umpire was unable to see the foot and somehow the referral was lost inexplicably. The frustration for the South Africans was compounded as Australia scored when Whetton was left wide open and converted easily to give the Australians the lead and their 200th goal in Commonwealth Games history.

The damage was doubled shortly afterwards when Govers was given plenty space down the left and he fired in a cross / shot across goal for Australian captain Zalewski to tap home easily. Minutes later Australia were awarded the games opening penalty corner but Gowan Jones made a wonderful save to deny the Australians.

A wonderful period of possession from South Africa earned an opportunity for the South Africans that Bili Ntuli turned and fired but it caught the keepers foot and fell just wide as the quarter ended with Australia leading 2-0.

Australia should have been 3 goals to the good but Ephraim turned and fired against the foot of the post when he really should have done better. Australia were the dominant force but the South Africans and the post were working in unison to deny the Australians as Haywood struck the upright from a penalty corner.

South Africa were still showing glimpses of danger led by Dayaan Cassiem, but were not testing the Australian goalkeeper in those opportunities, although Tevin Kok hit a beautiful strike from a tight angle that was well and easily saved. And as the half-time hooter sounded, it was the first time in the Commonwealth Games that the Australians had not scored in a quarter so far.

South Africa started the second half as they finished the first by playing party spoilers on the Australian attack and holding possession for a nice period of time. South Africa created a goal scoring opportunity as Taine Paton ran into the circle, slightly mishit saw the save turn out to be a bit easier than Paton, the match winner against Scotland, would have liked.

The South Africans were contesting with the Worlds top ranked team in the quarter far more gainfully than earlier in the game, but were thankful for Blake Govers wastefulness when presented with an opportunity 10 minutes into the quarter. With three minutes remaining in the quarter Australia received another green card and South Africa won a penalty corner with their one player advantage, their first of the game. Connor Beauchamp fired in the shot but it was charged down by the first wave runner. Despite another penalty corner being awarded Australia referred and were successful. 2-0 the score at the end of the third quarter.

The largest compliment to the South African performance was that Gowan Jones had been far quieter than expected although when he was called to make a save from Wheeton he was focused and fired up to clear it to safety.

Australia were awarded a penalty corner that South Africa wanted to refer for danger but they were punished for the strange decision in the opening minute as the penalty corner stood and Govers fired home. The hard work was in danger of being undone as another penalty corner was awarded. It was saved on the line by Jethro Eustice onto the cross bar superbly to deny Australia. South Africa would have the final chance but it was inches wide for Keenan Horne and that would be all as the game ended 3-0 to the Australians.

For South Africa its a simple equation that awaits tomorrow against New Zealand. Win and South Africa will be in the Semi-Finals and contest for the medals.