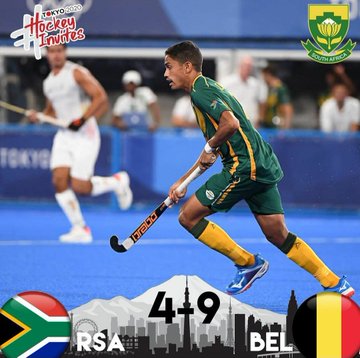 The South African and Belgian Hockey men came to battle at Oi Hockey Stadium on Tuesday evening with very different experiences of the tournament so far. The Belgians had defeated Germany and Netherlands already, while the South Africans had tasted two defeats so far, despite contesting manfully.

The African champions could not have wished for a worse start as just four minutes in the World Champions struck first. The South Africans showed heart though and Dayaan Cassiem scored a sensational solo goal to pull things level. Showing no lingering impact of missing the chance against the Dutch. The next ten minutes though were a display of efficient and clinical hockey from the best team in the world.

Hendrickx, Briels, van Doren and Dohmen with a second turned the knife into the chest of the South Africans with ruthless slugging out to emerge at the end of the first quarter with a 5-1 lead. You may have been forgiven if you thought the game would then turn into a rugby score, but the credit must be given to the South Africans who chose to stare the mighty Belgium in the face and keep plugging and continue to confront their much-fancied opposition.

Belgian got the opening goal of the second quarter before Mustapha Cassiem pulled one back with a delightful tomahawk passed the worlds best keeper Vanasche. As the South Africans tried to gain a foothole in the game Gougnard added a 7th for Belgium, but just before half time Bili Ntuli made it 2-2 for the quarter. 7-3 at the half time break.

The third quarter saw Dayaan Cassiem cement his name as one of the most sought-after talents in world hockey with another wonderfully taken goal. Club sides around the world would have taken note of that ability and targeting a summer signing of our hitman.

Understandably in the Tokyo heat the final chukka failed to match up with the quality of the opening three as the frenetic pace reached its conclusion and the game finished off with a goalless quarter.

South Africa now head into the next game against Germany with belief they can cause an upset, but with determination to make the country proud.