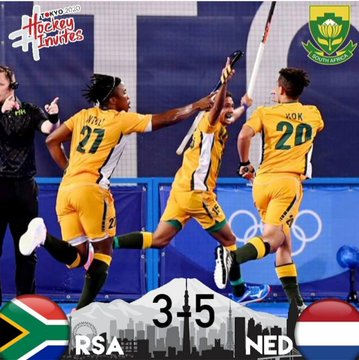 Just over 24 hours after both teams opened their Tokyo campaigns with defeats the Dutch and South African Men were back in action at Oi Hockey Stadium. The South Africans would be up against it as their head-to-head record was not great, with a combined 24-3 score from the previous four meetings. The South Africans were critical of their start against Great Britain yesterday but their could be none of that today as the Team Mzansi men came out firing.

Mustapha Cassiem created a pocket of space off the shoulder of his defender and from a marginal angle fired into the side of the goal. The Cassiem family, along with the rest of the South African hockey community, had another reason to cheer not long after as Dayaan Cassiem was on hand to finish after unselfish work by Bili Ntuli. The South Africans were 2-0 up and fully deserving of it.

2 became three with a sensational strike into the roof of the net after Nic Spooner’s shot was saved and Tevin Kok picked up the loose ball. It was a sublime finish and the Dutch were stunned. But they aren’t European champions for nothing and slowly started working their way back into the game.

They made their first dent into the lead with a thunderbolt strike from Mirco Pruijser giving Rassie Pieterse no chance, although he was having another fine game in goals denying 8 penalty corners in the match. The second came from a goal mouth scramble and when South Africa failed to clear Thijs van Dam bundled home the ball. That the goal game less than a minute after a yellow card would have frustrated the management team of the South Africans.

Netherlands were awarded a penalty stroke early in the second half but a Jeroen Hertzberger effort was closer to troubling ground staff than Pieterse. The Dutch would find their equaliser though through Thierry Brinkman through a well worked field goal and would finally take the lead through another penalty stroke. This time Mink van der Weerden made no mistake.

As South Africa surged forward looking for an equaliser they left gaps at the back and Mirco Pruijser was at home to finish superbly. It was the final nail in the coffin of a pulsating test match that made you proud, even if disappointed too.

The SA Men next take on the World Champions Belgium in their next group game on Tuesday.