SA Hockey Men make it three out of three against USA 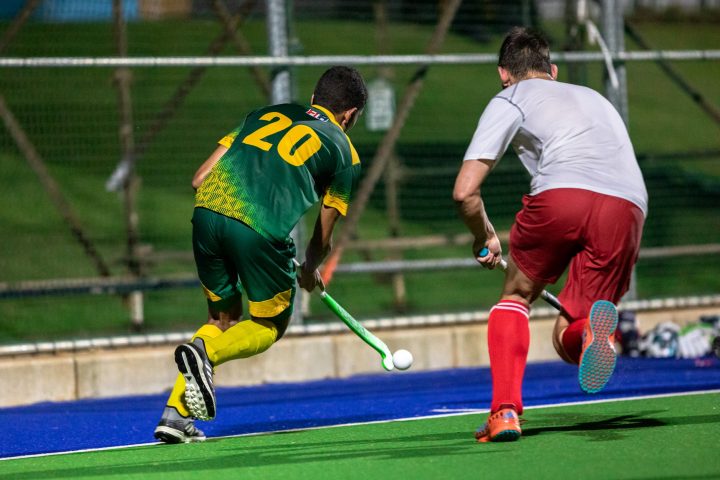 The SA Hockey Men made it three out of three with a 6-3 win over USA in the penultimate test match at Ashton College in Ballito. The victory confirmed a series victory for the hosts with one game remaining in the four-match showdown.

Things did not start well for the South Africans on Le-Neal Jacksons debut, USA emerged with a fire in the belly and opened the scoring through a superb reverse stick finish by Michael Barminski Jr giving Rassie Pieterse no chance in the SA goal. Although that goal created a nervous tension in the stands, it did not translate onto the field. The hosts showed a massive degree of patience and calmness and slowly exerted their dominance onto the game. They pulled level in the tenth minute. Bili Ntuli drove through the middle before passing to Dayaan Cassiem, the older Cassiem brother then turned to create space and fired a bullet into the bottom corner.

1-1 quickly became 2-1 to the African Champions as Bili Ntuli pounced on a rebound and finished expertly. The striker then doubled his teams lead and his own tally in the game in the second quarter when he collected a cross from Nic Spooner and turned strongly to create space and time for a wonderful finish. It was Ntuli’s 18th International goal in his 49th appearance for the country.

The South Africans should really have stamped their authority on the game and taken it home from there, but the Americans showed why they are a great test for the African men, continuing to fight and show determination. Against the run of play they got themselves back into the game. A blistering penalty corner was saved onto the cross bar by Pieterse, but the rebound was tucked away by the onrushing Jonathan Orozco.

The South Africans re-established their two-goal cushion when Taine Paton and Jethro Eustice combined to set up a Mustapha Cassiem diving deflection that was both aesthetically pleasing and crowd calming. It was the first time that both Cassiem brothers had scored in the same test, much to the delight of their family and the Ashton College crowd.

But once again the South Africans forgot their security conscious nature and left the back door unlocked for the Americans to close the gap through another Aki Kaeppeler penalty corner that Siya Nolutshungu would probably have felt he should have kept out.

The victory, however, was not going to be denied and Dayaan Cassiem made sure of that with an element of luck. His drive to the baseline created space for a cross which appeared destined for a tap in goal for Clinton Panther but a deflection off a USA defender meant the goal went in for Cassiem instead. The South Africans also added one more through a rocket from Daniel Bell at a late penalty corner that gave the score-line the gloss it probably deserved.

The two teams square up tomorrow (Wednesday) at 09:00 for the final game of the series before the Americans will head home and the South Africans, with several changes, will head to Johannesburg to take on Germany in four tests at Wits University.