South Africa are the African Hockey Road to Tokyo 2020 Champions 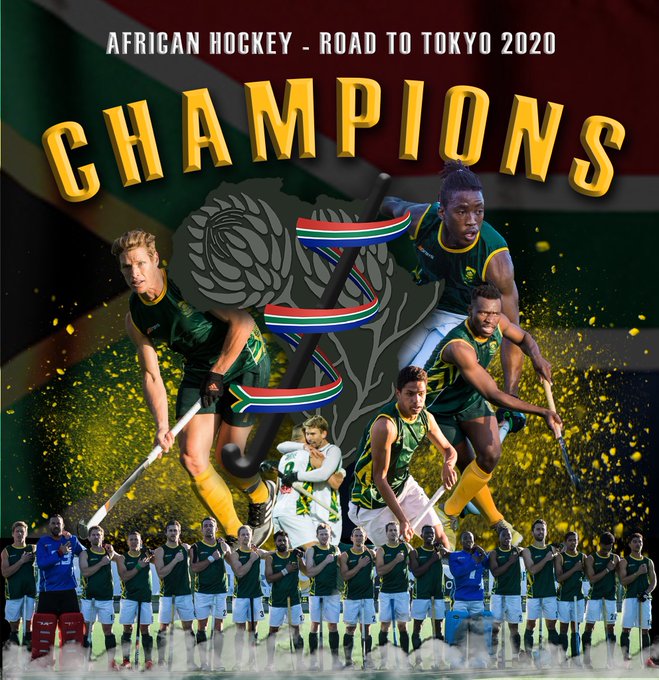 The South African men and Egyptian men locked horns in the final group stage game of the African Hockey Road to Tokyo 2020 competition. The way the results had played out the game was in essence a final.

A packed crowd at the University of Stellenbosch greeted the two teams and they produced a fantastic display of the best of African Hockey. The Egyptians had four penalty corners at the end of the first quarter, but the South African defence managed to repel all four. On the edge of half-time though the Egyptians did take the lead with Ahmed Elganaini reacted first after a rebound and finished into the bottom corner.

South Africa waited for the final quarter before Nicholas Spooner stood up and raised his hand to be the hero. Having scored in the last minute of the FIH Hockey Series Final semi-final to get the South Africans to that final. He popped up again to be the man to count as he netted two quick goals to turn it around. He then popped up with a third after Clinton Panther produced a sensational run but was taken out in a professional foul. Spooner finished the flick to complete a remarkable final hat-trick.

The Egyptians poured forward but found a resolute South African defence and an inspired Rassie Pieterse difficult to break down but did manage a late goal through Ashraf Said as a consolation. The result secured the title for South Africa and the African Hockey spot at the Tokyo Olympics.

Earlier in the day Ghana secured themselves the bronze medal in a pulsating encounter with Zimbabwe that set the tone for an incredible final day’s action. Michael Baden opened the scoring with his first in the tournament, but Zimbabwe pulled back through Rangarirai Mungwiniri. The scored remained that way until the second half when the action kicked off. In the 34th minute Johnny Botsio made it 2-1. The last quarter then produced more goals than the opening 3. Elikem Akaba made it 3-1 through a penalty stroke but Zimbabwe kept the game alive with a Gift Chomunorwa field goal. Elikem Akaba made the game safe with a 4-2 lead despite a late Tendayi Maredza penalty corner. For Ghana it meant a satisfying bronze medal after a tough week of hockey.

Kenya avoided the wooden spoon with a 3-1 win over Namibia. The Kenyans goals came through Willis Okeyo, Constant Wakhura and Festus Onyango while Nico Neethling earned a late consolation for the Namibians.