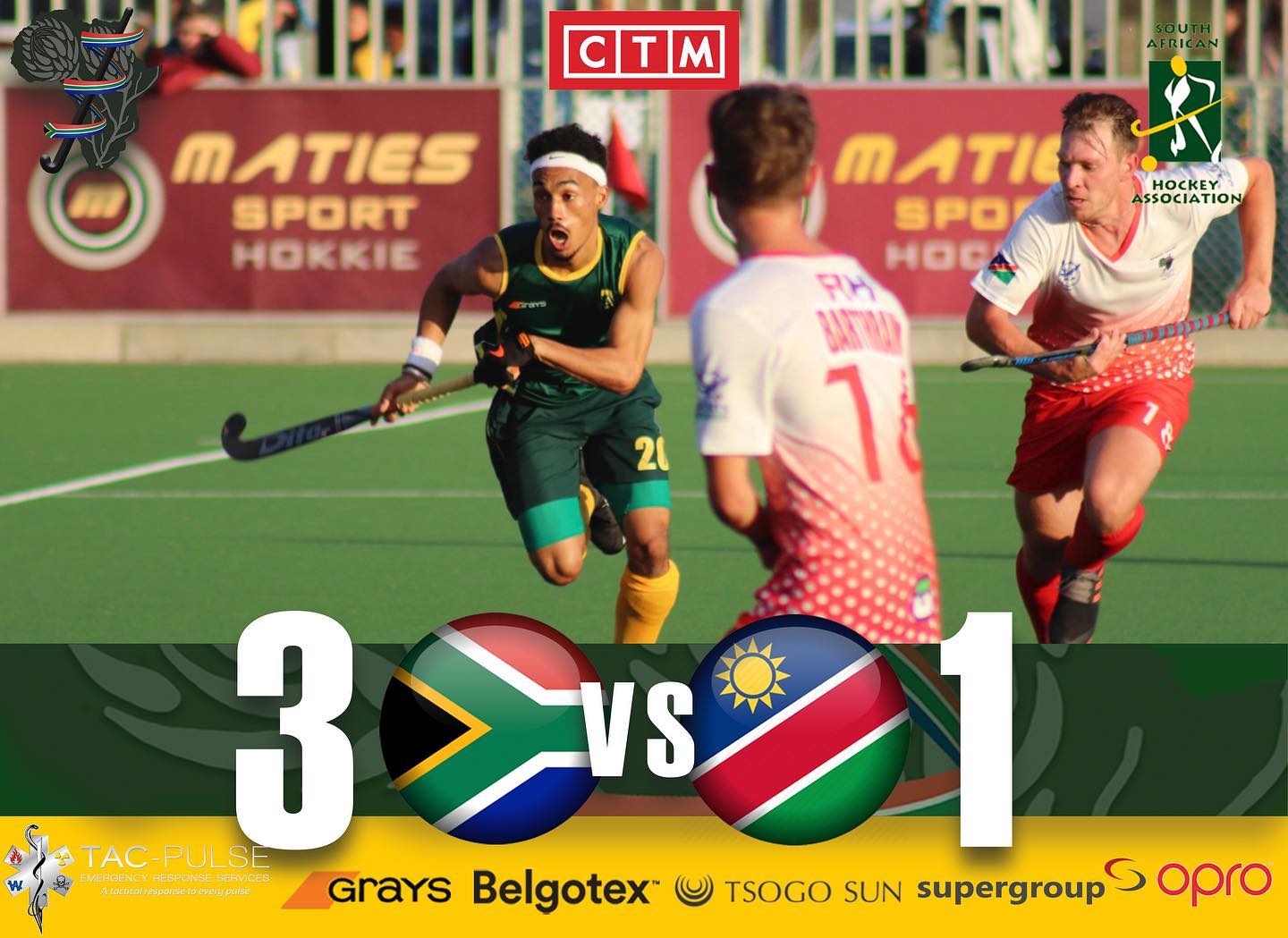 The opening day of the African Hockey Road to Tokyo 2020 got underway at University of Stellenbosch today with six African Hockey nations competing for the continents ticket to the Tokyo Olympic Games.

The South African Hockey Men got the tournament off to a good start with a 3-1 win over Namibia. The match was also the 150th cap for long-time goalkeeper Rassie Pieterse and he was presented with a pennant to mark the achievement.

After a goalless first half the South Africans broke the deadlock through the mercurial Dayaan Cassiem. The Western Province local forced an error in defence by the Namibians before he surged into the D and finished expertly past the impressive DJ Strauss in goals for the Namibians.

Into the final quarter South Africa made the game safe as Austin Smith, another local in the South African team, earned himself a brace through penalty corners. The first was a low drag flick just over the backboard before the second was a rocket into the top right corner. There was time for a late consolation goal for Namibia that their performance deserved. Percy Barthram got onto the end of a penalty corner variation to finish the game 3-1.

Egypt had earlier laid down a marker with a 6-0 win over Zimbabwe. The star of the show was hat-trick king Ahmed Elganaini, while there was a brace from Amr Sayed and Amr Ibrahim completed the scoring to get the Northern Africans off to a fantastic start.

Ghana twice came from behind to deny Kenya and steal a big opening day win. The highlight being a last-minute winner that sent the Ghanaian fans into raptures. Constant Wakhura had opened the scoring for the Kenyans before Benjamin Kwofie levelled for Ghana. Festus Onganyo would have sent the fans into raptures giving Kenya a late lead before Ghana produced an outstanding fightback through Elikem Akaba and then skipper Salya Nsalbini to win a superb encounter.

The SuperGroup South African Hockey women had a bye on the opening day as the women’s tournament only has five nations competing and were able to get an early look at this opposition. In the opening game of the tournament it was the Ghanaian Women who landed the first strike. They were victorious 3-1 over Zimbabwe. Vivian Narkuor got herself a first quarter brace to give the West Africans an early 2-0 lead. Sophie McDonald gave the Zimbabweans a glimmer of hope with a 21st minute field goal before Roberta Sarfo made the game safe for Ghana.

A spirited performance from Namibia was not enough in the second game against Kenya with Grace Makokha scoring the only goal of the game to give the East Africans a winning start against their Southern African opponents.