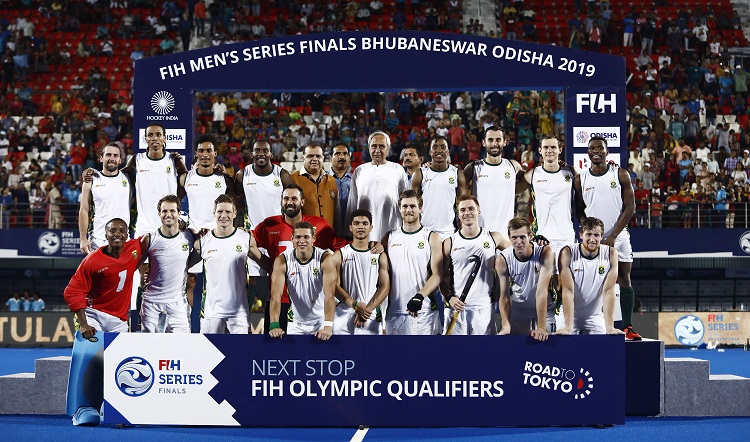 Heading to Bhubaneswar for the FIH Hockey Series Finals in India, South African hockey fans would have been hopeful but not overly optimistic of a top 2 finish. The men were at the start of a new coaching process and had very little time together heading to India. That they started the tournament with two disheartening defeats properly added to the lack of optimism. But on the edge of elimination South Africa fought back.

Of course, South Africa still had to play the final against hosts India and faced a massive crowd in support of the home nation. India on their day are simply breath-taking and today was one of those days as the hosts outshone the African champions from the start of the game. They won two penalty corners in the first quarter and scored from both. The first in the second minute from Varun Kumar before Harmanpreet Singh followed suite in the 13th minute.

Singh added another with a fortuitous penalty stroke awarded in the 25th minute and at half time India led 3-0 having had 18 circle entries to South Africa’s 3. That score quickly moved to 4-0 with Vivek Prasad netting from a field goal after some good aerial skills from Hardik Singh and Varun Khumar made it 5-0 early in the fourth to the delight of the capacity crowd at the Kalinga Stadium. South Africa managed to get one back from a penalty corner with Richard Pautz the scorer but in truth it was just a consolation goal.

For coach Garreth Ewing and his assistants Sihle Ntuli and Cheslyn Gie it will be a case of job done. The performances of some players will be particularly pleasing with Rassie Pieterse having his best series in goal, while Austin Smith, Jethro Eustice and Tyson Dlungwana were particularly pleasing in defence. Nicholas Spooner and Bili Ntuli both continued to build their reputations as well. The focus will turn quickly onto the African Cup as Ewing will know that a lot of the hard work is still ahead.

For South African hockey fans, the focus now switches from India to Spain, from Bhubaneswar to Valencia and from Men’s Hockey to Women’s hockey as the SuperGroup South Africa ladies attempt to continue their Road to Tokyo with a top two finish in a tough field. The action gets underway on the 19 June.