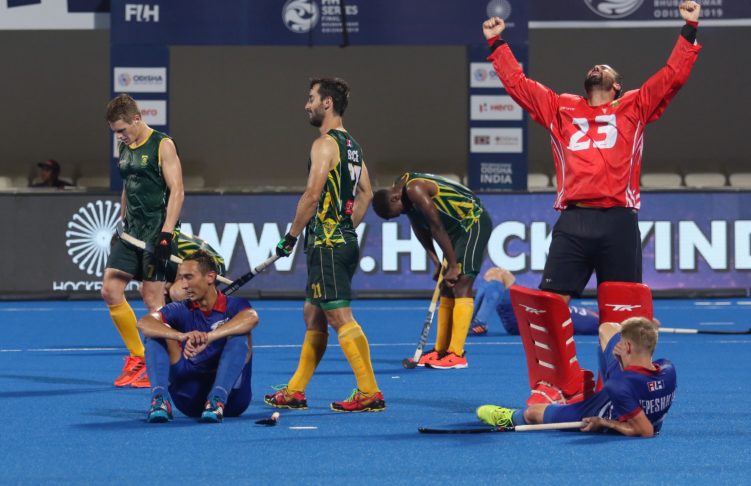 The FIH Hockey Series Finals in Bhubaneswar hit the business end as the cross over Quarter finals took place on the hottest day of the tournament so far. South Africa had finished the group stage in third place and took on Russia in what form dictated would be a mouth-watering clash.

The tempo of the game was blistering as both teams gave 100% effort in creating a spectacle of hockey. The game flowed from side to side with each team having periods in the ascendancy and periods where they had to defend doggedly. Rassie Pieterse was in great form for South Africa and ahead of him Austin Smith, Jethro Eustice and Tim Drummond were showing the stability of experience is so integral in big matches.

The game finally got its first goal in the third quarter when the man who knows where the goal is Nqobile Ntuli, continued to boost his reputation as a big goal getter. Bili responded to a half save from Gafarov at a penalty corner and finished coolly to the delight of the South African crowd watching on Supersport at home.

That lead was quickly pegged back at the start of the final quarter. Georgii Arussia fired home a penalty corner after Pieterse had superbly saved the previous one. This time the Russian striker made no mistake and put the ball into the net. A grandstand finish was set up as both teams would have the thought of a shootout in the back of their minds.

But it was South Africa that stood tall when it mattered most, and Richard Pautz took the opportunity to capitalize on the space he was afforded by the Russian defence to play through a perfect ball to Tevin Kok. Kok, who was a late injury replacement, showed a maturity that belied his age and squared to Ryan Julius who threw his stick at the ball and sent the South Africans into screams of joy that reverberated around the country much like 9 years and 1 day ago when Shaba scored.

The last four minutes offered South Africa a few chances to bury the game that weren’t taken, and fears were growing when Russia won a penalty corner in the last minute. They had struggled all game to beat Rassie Pieterse but at this corner they did only to be denied by a superb goal line save by captain Tim Drummond. South Africa had won the match and a space in the final four.

Nicholas Spooner: “We’re feeling pretty good. We didn’t play our best hockey tonight but we’re the winners at the end of the day against a good Russian side, so in these conditions we’re happy to get to the semi-finals. We didn’t have the best start against the USA in this tournament. It’s always hard from a South African point of view as we don’t have a lot of time together. We’ll be looking to put pressure on them and hopefully get a win there.”

South Africa know that a top 2 place finish will qualify them for the Olympic Qualifying Matches on the Road to Tokyo. To do that they will have to avenge the earlier defeat to USA in the semi-finals on Friday at 13:30 South African time. The whole country is behind the lads!