The Blyde River Bunters faced the gauntlet this morning and emerged the other side with their title defence still alive. It took only seconds to get the first goal of the tournament for the Bunters as the Namaqualand Daisies afforded Celia Evans too much space. The 2016 SA Hockey Player of the Year surged into the D and fired in a shot that was deflected home off a Daisies defender stick. It got better for the Bunters when a penalty corner variation landed at the stick of Izelle Verster who made no mistake.

It looked like a formality for the Bunters to record their first win but then began the Bianca Wood show. The youngster who made her national debut earlier this year against Namibia produced a sensational solo run and finish to pull one goal back for the Bunters. The goal brought back memories of the goal of the tournament by Simone Gouws in the first PHL. Wood then made it 2-2 when she was on the end of superb work by Thati Segoale to glance the ball home past Phumelela Mbande.

With the game heading into a shootout, Celia Evans grabbed it by the scruff of the neck and drove into the D before firing in a shot from an acute angle with just 16 seconds left on the clock. The Bunters tournament is still alive.

The Mapungubwe Mambas themselves made it four out of four with their own 3-2 victory over the Garden Route Gazelles. The Wade Dollman and Mustapha Cassiem show was once again highlighted in the opening goal as a blistering counter attack led the two strikers to combine before Cassiem was left one-on-one with Siya Nolutshungu and rattled the backboard with a fine strike. An error from Gazelles Lance Louw then gave Mambas captain Owen Mvimbi the chance to double the lead which he did with an emphatic shot into the bottom corner.

The best of their bunch was yet to come, and we had to wait until the second half before the other half of the Mambas bash brothers, Dollman got on the scoresheet. Picking up the ball just outside the 25, the striker arched a perfect run into the D before netting into the top right corner. It was a sensational finish.

Dan Sibbald had other ideas and drove his team back into the game. First, he effected a turnover against Jacky Mohlaba before firing the ball across the goal. Brandon James got the touch on the line to claim the goal, but Sibbald undoubtedly the architect. He was the architect of the second as a perfect cross allowed young sensation Marvin Simons to top into an empty net.

But the Mambas would hang on and secure their top spot and a fourth consecutive victory in the 2019 CTM Premier Hockey League.

The St. Lucia Lakers were looking to secure their own semi-final spot when they took on the Madikwe Rangers, but it was Sandile Bosman’s team that were smiling at the end of the four quarters. The Rangers knew a defeat would leave their tournament hopes in tatters and spurred on by that, and her national squad selection, Nomnikelo “Nicky” Veto produced a player of the match performance in guiding the Rangers home. She netted twice once through a superb solo strike and a second through a deft touch after a great Lisa Deetlefs pass.

The Lakers though fought back and got on the scoresheet when Megan Anderson bundled home at a penalty corner to give the game life, but the Rangers were good value for their lead and let the clock run down and secured a much-needed win.

The Rangers will play the Wings tomorrow, while the Lakers take on the Bunters. Both aware that a slip up could allow the Daisies or Bunters to usurp them into the semi-finals. 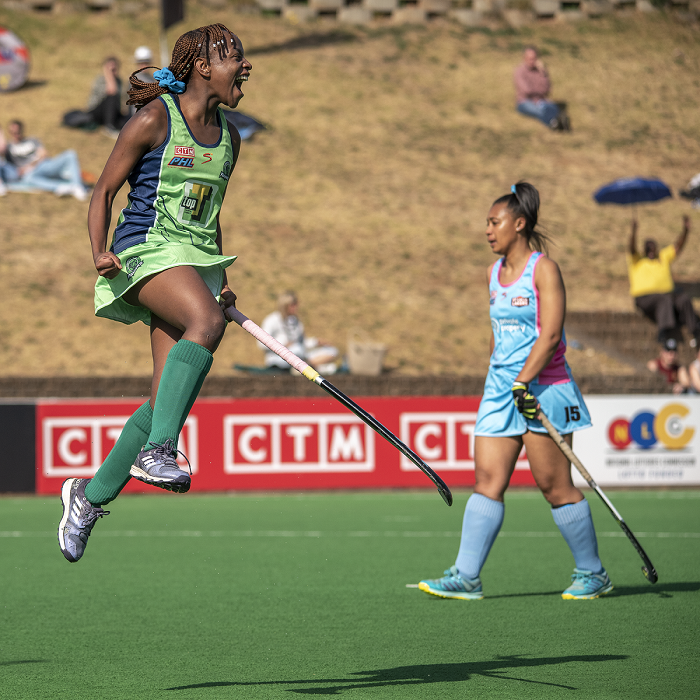 The inaugural CTM Premier Hockey League final was between the Addo Elephants and the Maropeng Cavemen and the old adversaries faced off again in the group stages. Both teams still feature their original PHL Coaches and have produced some classics along the way. Today it was the Elephants who got the last laugh as they emerged victorious in a 6-3 goal fest.

The Elephants led 3-1 at the end of the first quarter with Julian Hykes netting a brace after former Cavemen striker Cerezo Comerasamy opened the scoring with an effortless flick into the side net. Hykes two goals were typical Julian goals fired home with venom. Craig Wiid had pulled one back for the Cavemen with his third pc goal of the season, but they showed superb fight in pulling it back to 3-3. Keegan Hezlett scored a thunderbolt reverse stick straight through Martins before Courtney Halle added to his goal against the Dragons. As thoughts would have gone towards the win for Mark Sanders side, they were sucker punched by a quick double from Sinoxolo Mbekeni, who scored after superb work by Chad Futcher, and Comersamy with his second, a good touch of fortune in that one.

As the game headed towards its conclusion, Hykes popped up with his 3rd of the game, 4th of the year and 12th all time PHL goal giving former national and provincial team mate Rassie Pieterse no chance with a brilliant drive into the bottom corner. That goal wrapped up the victory but also the bonus point that puts the Addo Elephants on the brink of the semi-finals.

It was one-way traffic in the days final game as the Drakensberg Dragon routed the Golden Gate Gladiators 6-0. The results sent the Gladiators home without a win and meant it would be a straight fight between the Addo Elephants and Garden Route Gazelles for a semi-final spot.

Ryan Crowe struck early for the Dragons and the result was never in doubt from that moment on. They methodically added goals throughout the game with Dylan Swanepoel making it two before Ignatius Malgraff, the all-time leading goal scorer of the Premier Hockey League produced a moment of sublime individual skill to leave all mesmerised in making it 3-0.

In the second half Richard Pautz reacted first to make it 4-0 after good Bili Ntuli work before Ross Hetem benefitted from a Pautz pass and his own sublime finish. There was still time left for the Dragons to get their 6th and final goal through Ignatius Malgraff, netting his 15th all-time PHL Goal to confirm the Dragons will be there for the final games next weekend.