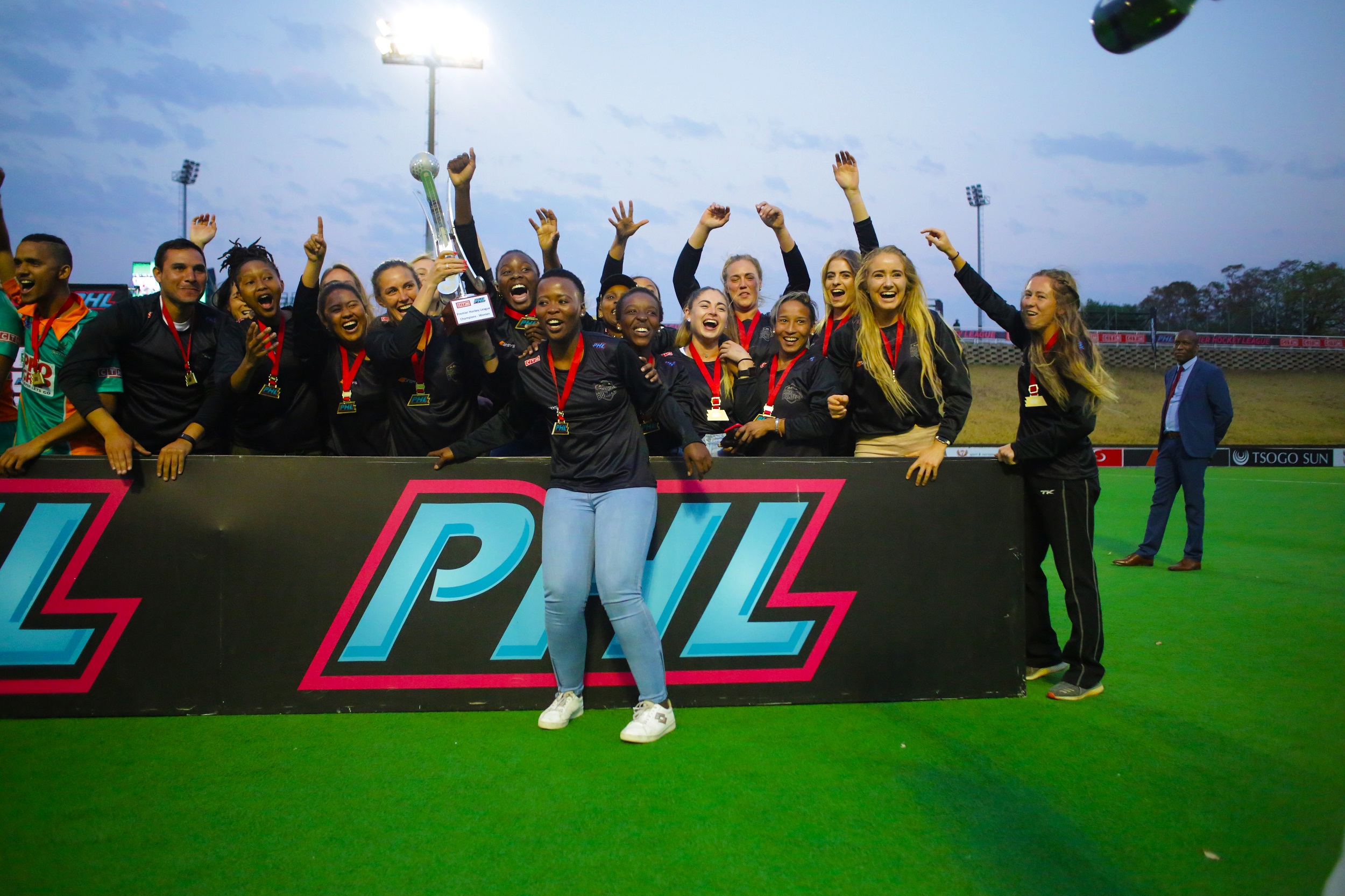 The Blyde River Bunters secured their second CTM Premier Hockey League title when they overcame the Madikwe Rangers in a tense battle at Randburg Astro this afternoon. In the men’s tournament there was a new champion as the Drakensberg Dragons emerged victorious in the battle with the Addo Elephants.

Much of the early game was down to a titanic midfield tussle led by Izelle Verster for the Bunters and Lisa-Marie Deetlefs for the Rangers. There were some unbelievable lines run by the Bunters forward duo of Thati Segoale and Courtney du Preez, but the final ball was just not arriving for the 2016 champions. Monique Bartsch was particularly impressive for the Rangers who also couldn’t get through the opposition backline.

In a game of only four shots on target, split evenly, just 38 circle penetrations and only three penalty corners it was always going to come down to who took their opportunity. Unfortunately for the Rangers the answer to that question was Izelle Verster for the Bunters. Verster turned on the top D to create space and fire a low finish past Modipane in the Rangers goal. That goal for Verster added to her assist in the 2016 final for the Bunters when she had set up Kaydee Miller for one turned out to be the championship winning goal.

As the Rangers tried to force their way back into the game Lisa-Marie Deetlefs tried to gain traction in the final the Bunters raised their work load and blunted attack after attack with Jessica De Bruyn-Smith and Carmen Smith being particularly impressive. When Sylvia van Jaarsveldt missed a golden chance to beat Phumi Mbande in the Bunter goals in the last minute it was to the sheer delight of Marcelle Keet and her Bunters team, becoming champions for the second time in three years.

“The grit and display are a culture of the Bunters. We had a great team plan from Marcel and the coaching staff to press high up and we are delighted it came off! Champions, yeh!!” shared an elated Bunters captain Phumelela Mbande 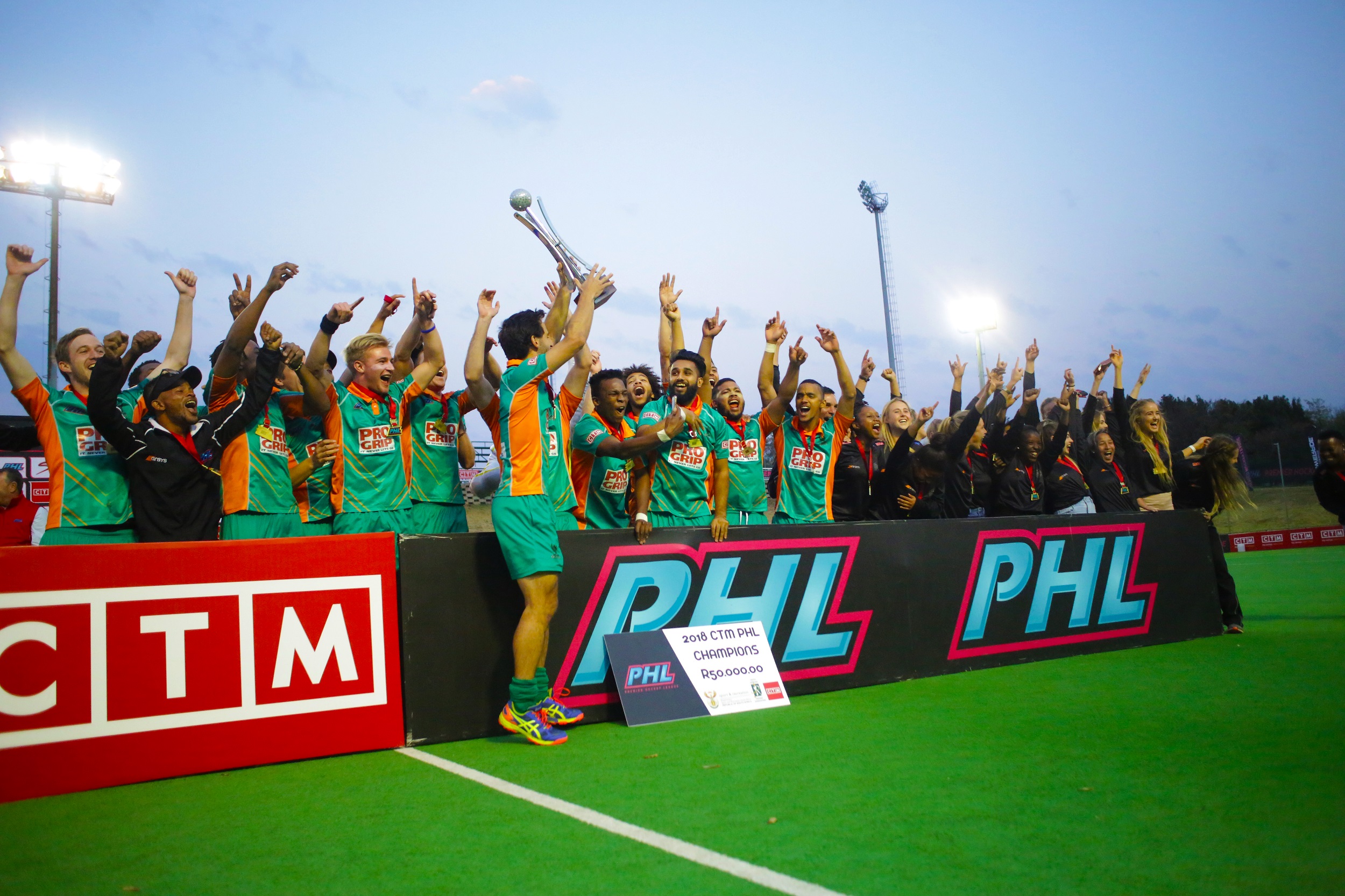 Having both tasted defeat in the final before both the Drakensberg Dragons and the Addo Elephants were keen to add a gold medal to their collection, unfortunately only one of them would be able to do so.

The Elephants were up against it early though as Bili Ntuli gave the Dragons the lead in the third minute. A penalty corner by Matt de Sousa was parried away by Matthew Martins but after a short scramble in the circle Ntuli fired it home with clinical quality. Paired with his semi-final goal and his IPT final winning goal it’s further cementing his reputation as a big game goal scorer!

The Dragons didn’t need to wait too long for their second goal and when it came it was a real moment of quality. In the 20th minute they won the ball out of defence, Richard Pautz traded passes with Francois Pretorius who then fed Ntuli up in the circle. His shot was superbly saved by Martins, but it fell to Pautz who lifted the ball before smashing it into the net.

The Elephants were producing moments of true beauty in the middle of the park but were making mistakes around the circle and in truth Gowan Jones had very little to do in the Dragons goals for much of the match.

To their credit the Elephants refused to lie down and after pulling their keeper off for the final five minutes gave it their all to at least get a consolation goal, while Dan Bell was mopping up anything that came through to the back. They were unfortunately unable to break down the resolute Dragons backline and had to make due with another silver medal.

Victory confirmed another title for Sihle Ntuli as coach after his African Youth Games with the Under `18’s as well as the IPT with Kwazulu Natal Raiders earlier this year, further cementing his status as one of South Africa’s best coaches.

“Its been three years for us to get to this position. It’s a 23-man squad and every single one of the team played an important role in the title. If you get two clean sheets in the knock out stages, you probably deserve to win the title and we are chuffed with doing just that! “shared victorious captain Jethro Eustice.

In the other games on the day, the St. Lucia Lakers took advantage of an off-colour performance by the Orange River Rafters to win the bronze medal with a 3-0-win courtesy of goals by Stephanie Baxter, Shelley Jones and Kara Botes. In the Men’s bronze medal match it was a shootout success for the Gazelles to win the bronze, their best PHL finish. There was one goal in each quarter with Brynn Cleak scoring in the first for the Cavemen, Michael Abrahams in the second for the Gazelles, Brandon James in the third for the Gazelles and Rusten Abrahams in the fourth for the Cavemen sending the game to shootouts.